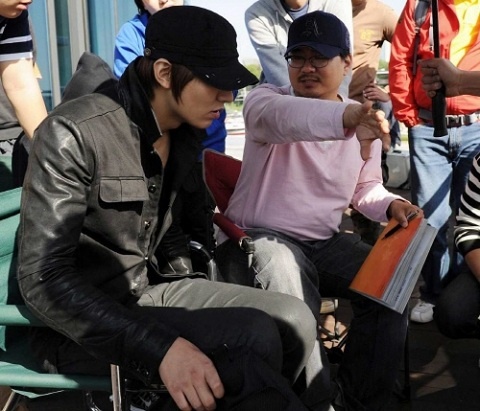 Director Jin Hyuk shared some behind-the-scenes stories about how he casted Lee Min Ho, Park Min Young, and others for his action blockbuster drama “City Hunter.” Jin Hyuk started, “I had just finished filming ‘Prosecutor Princess’ in 2010, and Lee Min Ho was done with ‘Personal Taste.’ I told him, ‘let’s work on our next project together,’ and he agreed. This was before I even had a synopsis or script for ‘City Hunter.’” He added, “Park Min Young also started training for judo and martial arts after just a verbal agreement. I was very thankful.”

Likewise, Kim Sang Joong, who plays Lee Yoon Sung’s surrogate father Lee Jin Pyo, joined the project without second thought when director Jin Hyuk personally visited him on set where he was filming. Jin Hyuk praised, “He created so many memorable and charismatic scenes, like the one where he saluted underwater to his best friend during the night of the wipe-out plan.”

Director Jin Hyuk stated, “I wanted to thrill many people with ‘City Hunter’ and show them the lives of people who grew up in an unconventional family background. Thank you for showing so much love towards ‘City Hunter,’ and we’ll do our best to finish the second half of the series strong.”

Meanwhile, “City Hunter” has secured its No. 1 spot with viewership ratings of 18.4% and 18.8% (AGB Nielsen) last week. Many are predicting that the action-packed drama will break the 20% mark this week. Even before its premiere, “City Hunter” managed to sell broadcasting rights to the United States, Hong Kong, Thailand, Vietnam, and others based on a stellar cast lineup, famous director, well-known screenwriter, and a strong storyline based on a famous Japanese manga. The drama exceeded expectations and have been well-received both domestically and internationally. SSD has recently announced that it has sold the drama’s broadcasting rights to two more countries, Cambodia and Myanmar.

“City Hunter” will air its thirteenth episode tonight on SBS at 9:55PM KST.