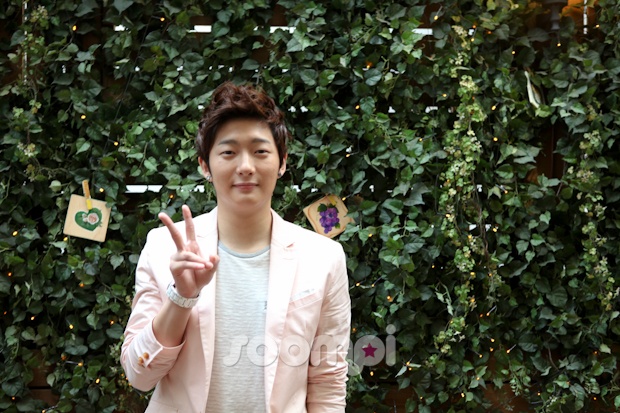 Imagine waking up one day only to find out that you are one of the most promising young stars in K-Pop. Perhaps, that’s the best way to describe San Francisco-native David Oh’s venture into K-Pop stardom. With only about 10 band performances under belt during his brief amateur career, David Oh decided to embark on a journey that at the time no one else had gone on—applying to the MBC “Star Audition.”

“When I first found out about the ‘Star Audition,’ I didn’t know if I wanted to do it because I didn’t feel like I was ready,” David Oh said of his first encounter with Star Audition’s recruitment process. “But then my dad found out and told me, ‘You should try it. You got nothing to lose.’”

Motivated by his father’s little piece of encouragement, the 20-year old college freshman took the chance and made a decision that later turned out to be, what he describes as, “a life-changing experience.” “I thought the ‘Star Audition’ was kind of like a life-changer for me. I always wanted to be a singer in Korea but I really didn’t have opportunities that much until this came up. So I took the opportunity and it turned out to be like this now.”

Once he made it past the first round in LA, David Oh step by step made paced through the preliminary rounds in the U.S. Although he faced a lot of uncertainties and was clueless to what the end of this journey would shape out to be, David Oh kept fighting to achieve his life-long dream of one day singing in Korea. “I kind of had to give up everything to come here and do this. I don’t know why but I always felt this tie to Korea and wanted to perform here. If this is really your dream, and if you really want to become a singer in Korea, you should definitely try out for the ‘Star Audition.’”

David Oh made it to the Top 5 of the “Star Audition.” He went up against some of the most talented amateur singers from virtually around the world; Canada, Japan, China, the US, and even some European countries. Although he did not win the show, David Oh was able to land an agency contract with Big Hit Entertainment, one of Korea’s largest music agencies run by Bang Shi Hyuk, his mentor from the audition program. “It’s kind of like a dream,” David Oh said of the whole process. “When I was in California, I would dream about ‘Oh, I wish I was in Korea and be a singer here,’ but all of a sudden, it’s kind of like happening right now.”

David Oh was one of the most popular contestants throughout the program for his great vocals, charming looks and sweet smile. That has also led to his role on the new season of MBC “We Got Married,” starring with fellow “Star Audition” contestant Kwon Ri Sae as newlywed couples. “It’s really fun. Right now I should be practicing and stuff, but because of the program (WGM), I get to go on dates and explore Korea.”

But even with a big time contract, casting on a top variety show, and a growing fan base, David Oh still doesn’t consider himself a celebrity yet. “Am I a celebrity? I don’t think I’m there just yet,” David Oh says with a sheepish smile. He believes there’s still a long way to go to become someone like his role model Lee Moon Sae. “I just want to do music for a long time and have my music loved by many people (like him).” Regardless, David Oh wants to emphasize that any aspiring singer should follow in his footsteps and come up through MBC “Star Audition” because it’s just “a great opportunity.” “I just want to tell people that they should try out. If ever there’s an opportunity like this, don’t hesitate and just do it. Even if you don’t win, you still earn a lot just by doing this.”

Q: It must have been a tough decision for you to come to a new place where you never really visited before. It’s culturally a lot of different and you don’t know the industry that well. How was it?

A: It was tough when I first came here, but I like doing this so that kind of overshadowed the tough part. Korean culture is a lot different from American culture, and I got in trouble a lot of times because I really didn’t know if you’re supposed to do it this way or that way. So it was kind of hard. I’m learning right now, and because I like being here, it’s a fun experience.

Q: What would you say was the most difficult moment during the show?

A: I guess adjusting to Korean culture, and learning the lyrics because I had to learn a new song every single week. It was kind of hard doing that. You have to express the feeling of the song but because it’s in Korean, I don’t understand the lyrics, so sometimes it’s hard to deliver the actual feelings to people. So that was kind of hard.

Q: How did you do it in such a short period of time?

A: For the lyrics, memorizing lyrics wasn’t that hard, but for me, the pronunciation, like I spent nine hours just sitting there with a hyung and he would tell me about pronunciation. And I would put a pen in my mouth and just say it over and over again, and try to fix my pronunciation. For feelings, I would translate the lyrics to English words so I could understand it better, and that’s how I kind of understood how to express the song.

Q: What is the biggest difference being amateur and professional?

A: I guess being an amateur, you’re really free, like you can do whatever you want. But as a pro, you’ve got to have a professional mind I guess now, just because I like this song I can’t just sing it in front of the people. I got to prepare 100% and show that I am more professional now. Before when I was an amateur, I could be like, “I think this song is good enough,” and I could just play it, but now because I have fans, I think I have to please them and show that I’m a professional now. But I really like singing, making songs, and performing in front of a lot of people, so that doesn’t change. I just have to learn how to adjust myself.

Q: How is it working with you mentor, Bang Shi Hyuk? What does he mean to you?

A: He’s a big brother to me. I’ve never had a mentor for music in my entire life. He’s like the first person to mentor my music life, like he kind of shows me the way professionally, teaches me about music, and many other things. But truthfully, I didn’t know who he was before I did the audition. But after I got to know him, and searched him up, he’s a really respectable man. He’s really powerful in the music business, so me getting to work under him, and learning from him, it’s like a really big experience for me. But when we’re doing work, if I’m not doing it properly, he gets a little scary I guess. When he’s at work, he’s serious but when we’re just at home, relaxing, then he’s just easy. So he really likes people that work hard and so if I work hard he has no reason to get mad at me, so I just got to work really hard. He’s not as scary as they portray him to be on the show. He’s truthful but all the things he said, it’s not like he hated us, it’s all to help us. They could be a little harsh I guess, but you should take those words and I kind of fixed myself because those words were all good to me.

Q: I would assume if you spend a lot of time with your partner on “We Got Married,” even if it’s not a real relationship, real feelings would kind of grow?

Q: Have you visited Soompi before?

Q: When can we expect your debut album?

A: I don’t know exactly when, but right now I am preparing. I guess the faster I prepare the faster it comes out. Hopefully, it’s real soon.

Q: Are you learning how to dance too?

A: No, they say I shouldn’t dance at all (laughs). But I would like to learn how to dance too, I think it would help to know how to dance, but I’m not sure how good I will be.

A: I mean it is physically demanding, but because I’m doing what I want to do, I think I can keep going on. If somebody was to take this away from me, I would really not like that. Even though it’s really hard right now, I think it’s worth it because I feel like I’m improving. It’s preparation for me to get better so I could show people even better music, and I could also learn more music, so it’s a great situation for me.

Q: What’s your advice to people who want to follow in your footsteps?

A: I guess if everyone has the same dream as me, they shouldn’t give up, they should work really hard, and whenever they get the opportunity they should take the chance and try to make the best out of that opportunity. Because before I guess I didn’t really take the opportunities I got real seriously until I got this one, and because I really tried my best, I followed my dream, and it actually did come true. So if you have a dream, don’t let go of it and work for it.

*soomp here – I just had to track down his version of BoA’s No.1 that played at the end of the interview video – here it is! (starts at 0:49)

David Oh
MBC Star Audition
How does this article make you feel?