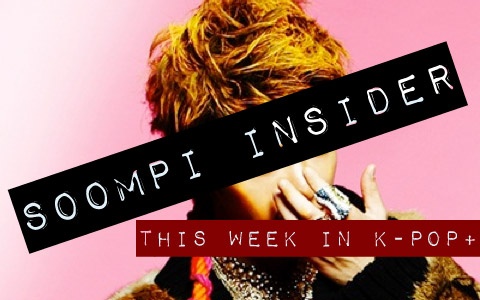 Welcome to Soompi Insider, a look at what happened in the K-Pop world this past week, as well as all the goodies you may have missed along the way. We have something for everyone (eye-candy, gossip, romance, contests, mental stimulation), so don’t be shy, and enjoy the ride! I added the “+” to “K-Pop”, since it’s the hot thing, and because by K-Pop, I mean Korean Pop Culture, not just K-Pop music. Glad that’s cleared up!

The most talked about stories this week were about our favorite stars being (or perceived as) less-than-perfect, whether it be Kim Hyun Joong‘s best friends saying he pretended not to know them, or Kara being criticized for washing their hands right after a handshake event (um, who wouldn’t?). Photos of BEAST’s Lee Ki Kwang surfaced showing the young (but adult) singer/actor smoking, Jang Geun Suk suffered from depression because of his immense workload, and as usual, our friends JYJ can’t catch a break. Fans were shocked, then relieved, and then worried again when actress Park Shin Hye was in a car accident. She was initially cleared to go back to shooting the drama Heartstings, but had to return to the hospital, cancelling Thursday’s episode. Perennial hero/villian SM Entertainment was all over the news with their stock reaching its highest value yet.

In happier news, Super Junior is coming back on August 3rd, and has been releasing outrageous(ly awesome) teasers for each member. Big Bang’s Daesung and the family of the victim of his motorcycle accident finally reached a settlement as well, though Big Bang won’t be making any appearances as a group for the rest of the year.

It was an active week in K-Drama land this week, with Micky Yoochun and Lee Da Hae‘s melodrama Miss Ripley coming to an end, and City Hunter reaching its penultimate week while maintaining its ratings dominance. Newcomer The Princess’ Man started off strong, a fusion-sageuk retelling of the Romeo & Juliet story.

The charming Heartstrings with CN Blue’s Jung Yong Hwa and the aforementioned Park Shin Hye continues to struggle with ratings domestically, but is fan-favorite abroad, as evidenced by its great popularity here on Soompi. Eric Moon and Han Ye Seul’s Myung Wol the Spy continues to be a fun action/rom-com with style. The eagerly awaited post-military comeback by Lee Dong Wook is finally here, with Scent of a Woman starting this weekend, starring the always fantastic Kim Sun Ah.

Here’s the rest of the week in a big fat nutshell:

I watched this video at least 5 times. Or 50 – I forget: An Easy (and Funny) Way to Get the Taeyang and TOP Look

Finally, the part you actually care about! I received the Dream High Director’s Cut DVD Set in the mail today, and it came with 10 nice 5×7 photo cards. Would you like them? Not the DVD’s, sorry – I mean the photo cards.

Here’s the easy way to enter: Follow @soompi on Twitter, and tweet “Hey @soomp, I want your Dream High photo cards! http://bit.ly/qLESkb”. That’s it! I’ll announce the randomly selected winner in next week’s edition of Soompi Insider. You can enter as many times as you’d like – tell a friend!

(sorry about the glare on the blurry pic :P)

This was your captain speaking,
-soomp!

Pic spam of the week:

Do you guys remember The Ceej? He’s all grown up now: