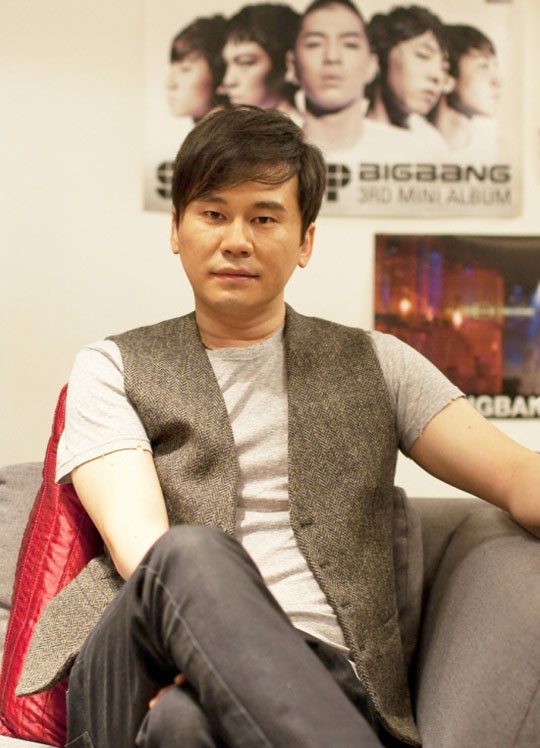 Much discussion has been brought to the table as of late regarding K-Pop’s expansion to outside of Asia. Earlier an article was written regarding speculation surrounding Taeyang and 2NE1’s advancements into the US. To back up these claims, in a recent interview following the announcement of YG Entertainment and Avex’s partnership, YG Entertainment CEO Yang Hyun Suk explains that YG artists will definitely be making an attempt at the American market, though when exactly is still unclear. Their entrance into America will either happen in, at the earliest, a year’s time or, at the very latest, two years’ time. Here are the specifics on Yang Hyun Suk’s decision from the interview, which if nothing else is promising.

First Yang Hyun Suk begins by explaining his original stance on international development. “We had been one of the most passive agencies when it came to activities overseas. Korea had always been our priority. And this is because if we focused our artists’ activities in Japan, their popularity in Korea could shake. That’s why they’ll pursue their activities in Korea and Japan simultaneously. When they release a song in Korea, the song will also be released in Japan within a week. …There is another reason behind why YG Entertainment has been meek in international advancements. It’s because we had spent a lot of time on the production of music. Our intention was to take the music we had created in Korea to the Japanese and European markets. Once Big Bang had made their debut in Japan, I had a chance to meet with the CEO of Avex, Max Mastuura. The two of us had many things in common as we both were introverts that enjoyed fishing. As we discussed music, the idea to establish YGEX was born. First and foremost I didn’t want to adjust YG’s musical flavor just to better fit Japan’s taste. In response Matsuura promised us that he would respect our opinion on the manner and would try his best to keep our style intact and to not change it.”

After Yang Hyun Suk explained his apprehensions and discussed the matter with the like-minded Mastuura, in order to have successful debuts in Japan, they have learned a lot about expanding their audience and how to do it without compromising their original feelings and styles of music. Giving him the confidence and ability to set his sights on the rest of Asia as well as Europe and the Americas, here is what he had to say regarding the matter: “There is no doubt the quality of the content coming from Korea is high thus it is spreading globally at an accelerated pace. It might be too early to say the Korean Wave has hit Europe but people outside of Asia with different cultures enjoying and supporting Korean singers were something we couldn’t have imagined in the past. I now see the possibilities of advancing into the American market from closely observing the changes that have taken place in the European market. The marketing potential for it is endless. I’m secretly looking forward to the US market as well. China and the US are actually the toughest markets. The US is also the market that most singers are targeting but it’s so big that I think it’s more effective to polish content made in Korea and inform them of it than to promote in the country directly. I think positively of Park Jin Young staying in the US for a long time and promoting his artists there but I’m thinking of a structure where an artist gains popularity, starting in Korea, and as that spreads, it draws in fans from the US. The way that people in France or the US find out about Korean singers is not just over the Internet but through Koreans in those countries which I think plays a big part and I think this could end up forming a market. There are various nationalities in the US so if a market forms there, it’ll be impossible for the US not to become affected. Due to all of this we will open the American market in the next year or two.”

After discussing these strategies he went on to discuss the musical appeal of YG artists to foreigners as well as the connections that the artists have made in recent years. These connections haven’t come about because of a sum of money but because of the common love of music. “I think it would be arrogant of us to consider our music as being better than theirs. But hip-hop has been at the core of our music, since Jinusean’s debut. Even when we do electronica music, it’s been within hip-hop. And just like the times change, music changes and crossover music will change as well so I think we do music that I think is in step with the trends of the global market. As much as our music has been influenced by music in the U.S. and Europe, we can speak of YG’s music naturally when meeting with industry people overseas. It was the same with 2NE1 working with Will.i.am. We didn’t have to pay Will.i.am a single dime. Will.i.am himself had watched 2NE1′s music video and said he wanted to make music for them. And if we were under a contract with him, we would’ve had to release a song on a set date. But this is something we’re doing because both parties wanted it so it’s taking longer to work on the album.”

He also hinted at another possible GD&TOP venture with the help of American DJ Diplo as well as the fact that the duo will be featuring on a track for Diplo’s upcoming album.

Right now, YGE’s plans focus on 2NE1 as they gear up to promote their second mini-album which will officially be released this week. The ladies are also first at bat for YGEX as they already have revealed the Japanese version of their hit single, “I am the Best”, followed by two additional singles coming in August on the 10th and 31st. August is busy for the group as they will hold their first Korean concert and right from there they will be touring Japan as well with their first Japanese concert in Yokohama, Kobe, and Chiba. Lastly, on September 21st 2NE1 is scheduled to release their full Japanese debut album.

As they look to the future the endless possibilities of YGEX are certainly exciting, while fans continue to anticipate what the company will try and do next. Due to GD&TOP’s relationship with Diplo chances are those in America will have the chance to hear two of their favorite YG artists sooner than they ever thought.