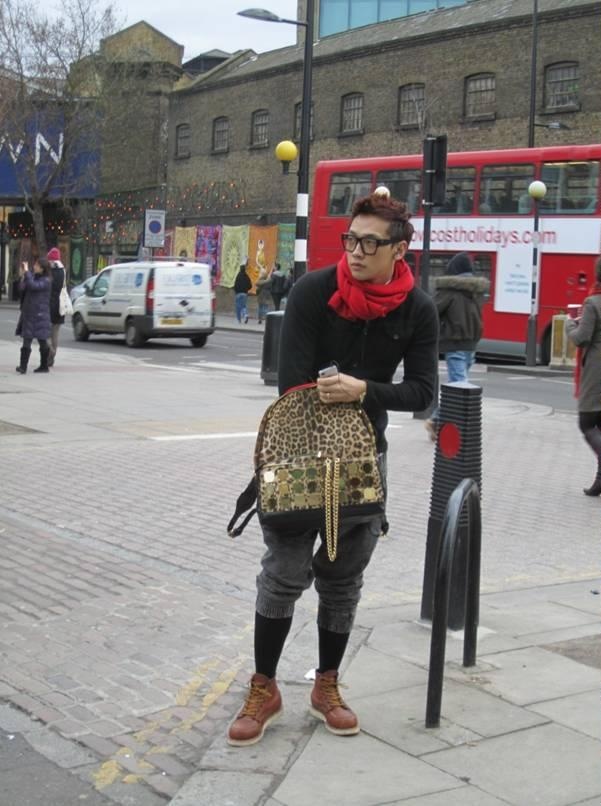 The latest leather accessory favored by celebrities isn’t monogrammed with LV or covered in a brown check pattern. Rather, it’s emblazoned with an MCM and often decorated with diamond-shaped gold studs. MCM is a luxury leather goods brand from Germany which has become very popular in Seoul, as evidenced by the many Korean stars who can be seen holding its wallets, clutches, and handbags. However, it’s the backpack which is particularly ubiquitous right now! You might think that it’s difficult for a backpack to look anything but utilitarian, but the structured shape and the metal detailing make the MCM backpack a stylish favorite of celebrities. Check it out!

DBSK’s Yunho has been seen wearing this cream leather model a couple times. It’s very versatile, as it goes equally well with a black leather jacket and a pastel cotton peacoat!

Not to be outdone, bandmate Changmin has sported a more hardcore version in black leather. The studs on the straps guarantee that this is a statement piece even from the front.

However, it’s Rain who may be most associated with the MCM brand, as he has modeled for them in the past and continues to appear at the brand’s events. Here, he can be seen carrying the classic Cognac Visetos model (first two pictures), a similar model in red, and a more adventurous version in leopard-print fur and gold plating. Wow!

MBLAQ’s Lee Joon owns the same backpack. His hair color may change, but the red bag works either way!

Bandmate Thunder also displays the versatility of his black canvas model (as well as his hat and sunglasses).

The always fashionable G-Dragon made sure his red-and-white theme extended to his scarf, sneakers, and backpack! As if that wasn’t enough, he clipped a matching MCM accessory to his pocket. Now this is an example of why G-Dragon is known for his style.

Actually, MCM seems to have a special relationship with YG, as they’ve made awesome custom jackets in fluorescent leathers for Big Bang and 2NE1. Here, 2NE1’s Dara sports a more utilitarian version in olive canvas.

But bandmate and leader CL doesn’t do low-key; her model was custom-made from pink leather and lots of gold plating!

Sporting the same model is — well, not bandmate Seohyun, but her “We Got Married” spouse, CN Blue’s Yonghwa! Poor Seohyun, she has to give a piggyback to this much-bigger guy, PLUS whatever he’s carrying in that big bag of his!

BEAST’s Hyunseung owns not one but at least two versions: Just like Rain, he’s been snapped carrying the classic Cognac Visetos as well as the Stark Backpack in red. (Or perhaps this is pink, in which case, we say, “Real men wear pink!”)

Bandmate Junhyung may look a little blase, but his loud Craig Redman model is anything but.

T-ara’s Jiyeon’s blue backpack really pops against the muted colors she wore not too long ago.

We will take this fansite’s word that the person carrying this Cognac Visetos is JYJ’s Micky Yoochun!

Are any of the MCM backpacks a trend you’ll be likely to follow?

Photo sources: Basically way too many to mention! We apologize for not listing them all, but please let us know if you want yours listed and we’ll get on it.