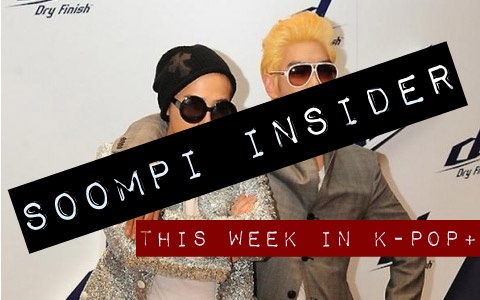 Soompiers must really be into bodies, as this is the 3rd week in a row where a part of the body has been the hot topic, though it’s a lot more innocent this time around – we’re talking about hair(styles)! G-Dragon‘s bold move last week to shave his head was met with rave reviews, and inspired an extremely popular compilation of celebs with shaved heads. Not to be outdone, Big Bang’s TOP also revealed a new blonde ‘do that has got people talking as well.

G-Dragon delighted fans this week by presenting a handwritten message to VIP’s worldwide about Big Bang’s upcoming 5th anniversary, as well as his own birthday. Speaking of birthdays, the big-man-on-campus this week was Jang Geun Seuk, who celebrated his 24th birthday and announced his next drama project with the famed “seasons” director, Yoon Suk Ho. He continues to show himself to be the next generation Hallyu superstar, being called “truly one of a kind” by a popular Japanese mens magazine, and finished off his six-country Asian concert tour.

There has been much controversy lately regarding content that is too sexually suggestive. This week, the whole “bad influence on the youth” bus got a couple more riders with the government determing songs by Kim Hyun Joong, DBSK, and Orange Caramel to be unsuitable for minors due to lyrics or music video scenes depicting drinking, smoking, gambling, or club scenes. Even the popular family show “Let’s Go Dream Team” got critized for the cameras focusing on certain body parts of female contestants.

There were a some weird and unfortunate things that happened this week, including ZE:A nearly getting attacked by a drunk guy during a live performance, and SISTAR’s Bora getting burned during a “Music Bank” rehearsal. People are losing their minds over the possibility of popular host Kang Ho Dong leaving “One Night Two Days.” The one that takes the cake, however, is the story of a Taiwanese woman almost losing her eyesight because of a K-Drama binge, watching for 70 hours straight!

On a lighter note, Super Junior dominated the music shows as expected, with their fellow SM label-mates supporting them along the way. Lee Hong Ki kept his promise to Park Shin Hye and visited the set of “Heartstrings“, which is wrapping up one-episode short at 15 episodes next week. Everyone knows Moon Geun Young as a great young actress, but did you know she is also the hip hop dance queen? SNSD’s Seohyun got to meet her unexpected idol, UN Secretary-General Ban Ki Moon. Finally, Lee Min Ho dispels dating rumors and reflects on his “City Hunter” experience.

Notables:
I spent 40 minutes going through the “From Ugly Duckling to Magnificent Swan?” thread, where people share inspirational stories & photos of their dramatic transformations. It’s new on the chart this week at #27.

Love the song, love the video – Alex‘s “Saying Goodbye with a Smile” is sure to put a smile on your face. Includes an adorable cameo by indie band Bye Bye Sea, as seen in the show “Playful Kiss”.

The winner of super deluxe edition of Super Junior’s 5th album, Mr. Simple, is hard-core SuJu fan kumorenai from California, whose favorite K-Pop moments last week were Super Junior’s album release and comeback performances – congrats! Message me on Twitter so I can send you the album!

Instead of having a separate giveaway this week, I will promote our incredibly awesome Soompi Twitter Giveaway that’s going on right now. The winner gets an iPod Nano, plus their choice from the following:

That’s it! A winner will be chosen from the tweets at random on August 25th. Though not required, I’d still love to know what your favorite K-Pop moment was this week – please share it with us in the comments below! Good luck everyone!

Pic spam of the week: I forced the Ceej to pose with the You’re Beautiful DVD Set currently on its way to Guatemala into the hands of last week’s winner, .liza.!