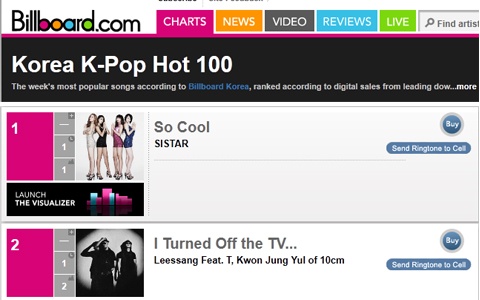 There is new K-Pop music Chart in town, and it is by none other than Billboard.com. It was launched today, August 25, and just like its original counterpart it will be called The Billboard K-Pop Hot 100 chart.

According to Billboard.com, the new K-Pop chart was launched in conjunction with Billboard Korea and is based on digital sales via leading websites as well as downloads from mobile service sites using an industry-standard formula and the most credible music data sources within Korea. The K-Pop Hot 100 debuts simultaneously here on Billboard.com and on Billboard Korea’s website, billboard.co.kr.

“The launch of the Billboard K-Pop Hot 100 chart is a milestone event, as it will provide the Korean music market with what we believe is Korea’s most accurate and relevant song ranking,” says Silvio Pietroluongo, Billboard’s Director of Charts. “We’re excited to be expanding Billboard’s globally recognized Hot 100 chart franchise into this country, and look forward to enhancing the K-Pop Hot 100 chart in the near future with additional data as well as creating new charts that showcase the breadth of Korean music.”

Meanwhile the artists dominating the top of the first Billboard K-Pop Hot 100 reflect the fact that hit-making girl groups are a top appeal in Korean music. The chart kicks off with girl group Sistar’s “So Cool” in first place followed by Leesang and 2NE1 on the chart’s debut week of Sept. 3.

2NE1
Billboard K-Pop Hot 100
Leessang
SISTAR
How does this article make you feel?