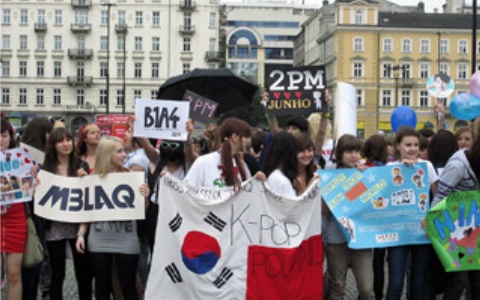 A K-Pop World Cup? K-Pop Contests Held All Over the World

K-Pop influence is spreading throughout the world. Korean Cultural Centers all over the globe have been holding a series of K-Pop competitions whole year round, with each country’s winners to be pitted against each other in a final round in Korea.

One of Korea’s nearest neighbors, Japan, has seen competitions held in its various cities. Japan is frequently an area of expansion for K-Pop artists, as many of the current crop of idols and groups are active and promoting in the country. Japan’s K-Pop contest will hold its final round on October 1.

Elsewhere in the world, two such contests are reported in the US. One was held in New York City on August 16, with a crowd of more than 1,000 people gathering in Manhattan’s Central Park despite the hot summer weather. Madison Gunst, a 15-year-old from Florida took first place with her dance performance of Jang Woo Hyuk’s “Weekend Night.” Second place went to Steven Clark, for his smooth rendition of Navi’s “Strong Heart.” Gunst and Clark bested 98 teams.

Zipper Concert Hall in Los Angeles played host to a three-hour contest held on May 27. A cover of Davichi’s “8282” catapulted Tara Louise to first place.

K-Pop has also reached Europe and Central Asia. On June 3, 300 K-Pop fans in the UK slugged it out with renditions of songs by 2NE1 and SNSD. Kazakhstan’s February 26 competition and Almaty’s April 30 contest featured participants performing to music by SS501 and SNSD.

Reports say that Korean Cultural Centers in Germany, Washington, France, Russia, Vietnam and the Philippines are planning to hold similar contests. All first-place winners will meet in Korea, via their round-trip air ticket reward, for the grand finals in November.