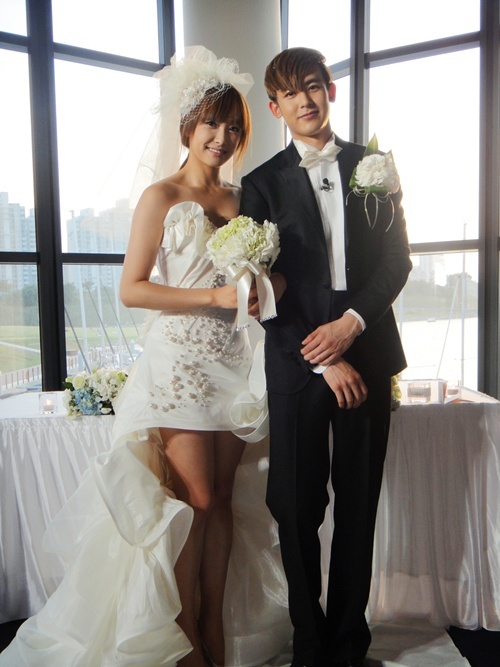 “Friendly Guide” Khuntoria Couple’s last remaining mission, “Dance Coaching’!
They have taken off their uniforms! The Khuntoria couple have appeared at the party in impressive clothing, what will they look like?

The Khuntoria Couple participates in the “Love Game” at the party as the Korean Representatives (?) They are shown competing against couples from around the world. Will the Khuntoria couple be able to get the honor of first place?

Khuntoria couple’s singing reverberates under the Maldives Sky and what kind of dance did Khuntoria do that made the people from around the world there go wild? Also, after the Khuntoria couple returns to their room after a rewarding day, why has the Senior “Friendly Guide” come to visit them?

After scrubbing themselves clean and making themselves shine at the sauna, the couple transform into their club clothing. Jang Woo, who has had diverse experiences in clubs versus Eun Jung, who has come to a club for the first time in her life!
What will the couple look like when they appear at Itaewon?

Meanwhile, Eun Jung is finding it awkward since it’s her first time at a club. Jang Woo pulls up his sleeves to help his wife adjust to the club scene! What is the “Tip designed just for Eun Jung” that Jang Woo has prepared for Eun Jung? Woo Jung Couple’s completely turbulent process of trying to master the club scene, fully revealed!

For a summer vacation, So-Won Couple visits the Water Sport Leisure Town at Chung Pyung!
This time instead of just the two of them, they have planned a trip together with the Kim Jin Pyo – Yoon Joo Ryun couple. Kim Jin Pyo – Yoon Joo Ryun Couple appears together with their cute 4 and 2 year old children. It’s the first time So-Won Couple has gone on a trip with kids, what will their first meeting be like?

Won Jun makes the kids burst into tears as soon as he meets them. What is Won Jun’s secret weapon that makes any crying kid stop crying? Afterwards, The So-Won Couple group goes out to enjoy the leisure sports and water games in earnest! The Kim Jin Pyo – Yoon Joo Ryung Couple who has 2 kids Vs So-Won Couple, who has no kids! What will the vacation be like for the two families in different situations?

David♡Ri Sae : Operation: Prepare to go out on a variety show for the first time as a couple!

David and Ri Sae Couple will be participating in the “Idol Star Athletics Championship!“ It is the first the couple will be appearing together in a variety show after becoming a couple. With a nervous mind, the couple prepares in their own way to go out on the championship. What kind of preparations will the couple do? How athletic is the couple?

Meanwhile, So that the couple can practice properly. A super idol star comes to be their coach for the day. Who is this special coach today that made Ri Sae jump up and down in joy? What will be the secret techniques that the coach teaches to the couple~ Will David – Ri Sae couple be able to successfully finish their championship preperations?