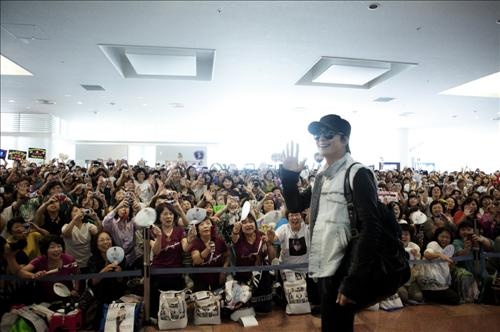 Bae Yong Joon descended in Japan’s Haneda Airport for the first time in nine months, causing the entire airport to become paralyzed by a swarm of fans who came out to greet him.

Bae Yong Joon arrived in Tokyo on September 2 with Kim Soo Hyun for the “Dream High Premium Event” set to be held on September 4. Despite the heavy rain, more than 45,000 fans came to see the Korean actor. “We saw more than 500 fans camp out at the airport from the night before on September 1, waiting for Bae Yong Joon and Kim Soo Hyun to arrive. Because of the limited space, some 1,500 fans couldn’t even come inside of the airport and instead had to see him from outside,” a Key East Entertainment representative stated.

According to Key East, there were roughly 300 security guards on site, and more than 30 local press outlets came out to cover their arrival.

Kim Soo Hyun, who co-starred in KBS drama “Dream High,” has been rising in popularity following his fan event that took place in August, where he showed off his acting and singing skills.