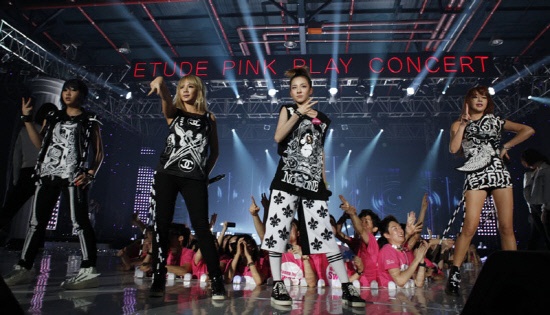 2NE1, MBLAQ and Others Perform at the "Pink Play Concert" Hosted By Etude House

On September 3, cosmetics brand Etude House hosted the second “Pink Play Concert” at SETEC, where various idol stars and musicians came to perform for a great turnout of spectators.

Artists that performed on the night include 2NE1, MBLAQ, 8eight, Mighty Mouth, and pianist Jin Bora. Not only did these celebrities perform some of their hit tracks, but also conducted a variety of events as a way to interact with the participants.

Before the official start of the concert, pianist Jin Bora came on stage and moved the crowd with a few classical pieces and also shared a heartwarming story about her dreams and passion of being a pianist.

The concert started off with a bang as MBLAQ performed the opening stage, after which they personally announced the winner of the “Pink Star” event that took place earlier in the evening. The winners were also given a photo session with the MBLAQ members as their grand prize.

Four performances each from 8eight and Mighty Mouth followed, which gave the gathering a true concert atmosphere.

The climax of the night was 2NE1. The four-member girl group sang their newest hit tracks as well as “Ugly” for the encore stage. Afterwards, they gave their warmest thanks for being invited for a second consecutive year and asked the spectators to look forward to more of their future promotions.

A representative of Etude House stated, “This year’s concert was planned to replay our customer’s love and support. This year’s event was even more meaningful not only because of the music, but also because aspiring stars were able to share stories of their ‘Pink Light dreams.’ We will continue to plan more of these kinds of events in the future.”