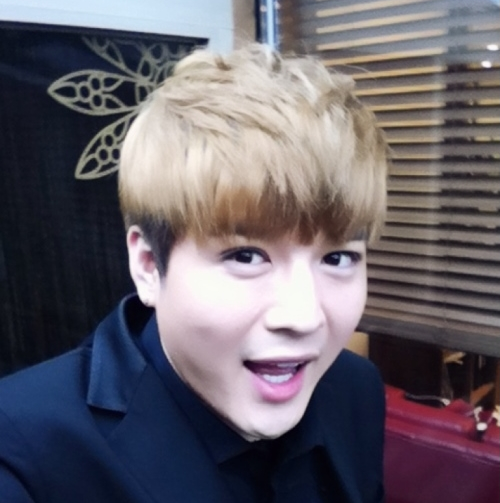 After hearing an emotional story of how one of the guests was really attached to wearing mountain climbing clothes (mostly because of his weight), Shin Dong got to share his story about his diet.

The guest today weighed 110kg. Before Shin Dong went on a diet he weighed a similar 106kg (roughly a little over 200 pounds). “My pants size was 42, so I couldn’t even wear jeans,” stated Shin Dong. “I always had to wear training suits/sweat pants.” Training suits were a form of comfort for the overweight Shin Dong.

“My friends would always criticize the way I dressed, and I would retort that ‘coming out of the house wearing a track suit is cool’ but I realize now that they were all excuses,” confessed Shin Dong.

“I really wanted to try on pants that hung loose at the hip area,” stated Shin Dong as he explained his motivation to start losing weight. Trousers were loose around the hip, so it looks good on more heavy set people. But Shin Dong stated that he “wasn’t able to even wear those. When I tried to wear them, they wouldn’t even go past my thigh.”

After that ordeal, Shin Dong dieted so he could fit into those pants. As he lost weight he had to keep buying smaller sized pants. He eventually lost enough weight to the point where he could confidently wear skinny pants. It was the epitome of success.

Eun Hyuk who was also on set said, “Maybe our guest can find the motivation to lose weight while trying on different styles of clothing,” but the guest responded by saying “But aren’t mountain climbing clothes pretty?” For sure, there was something special about Shin Dong’s motivation than the average man.