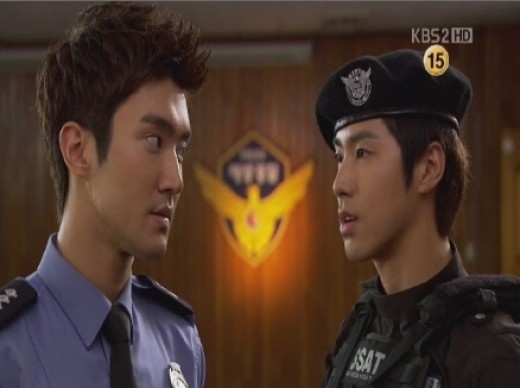 Choi Siwon and Yunho, the Perfect Combo: Poseidon is a Hit

The highly anticipated KBS’ drama “Poseidon” just aired its first episode on the night on September 19 in South Korea, showing signs of being a huge hit. Viewers’ response was hot, especially focusing on Choi Siwon and Yunho.

The “marine investigative action drama” stars Super Junior’s Choi Siwon as Kim Sun Woo, an “ace” naval officer who, after getting caught up in a messy case, is thrown into a special forces investigative team called Poseidon.

DBSK’s Yunho makes a cameo in the beginning episodes of “Poseidon” as Kang Eun Chul, a Marine Police Special Force member and leader of the tactics team.

Choi Si Won and Yunho, who hail from the same entertainment agency and are close friends in real life, are at odds from the beginning in the drama in a fierce battle of pride and skills.

Both men earned praised for their acting, with viewers describing their scenes as a battle of charisma. Especially Yunho who immediately left a strong impression by expertly leading the special forces mission that opened the drama.

Viewers responded to the first episode of “Poseidon” with “I think this is going to be a hit,” “there is no time to be bored with this drama,” and “the action is amazing!”

Episode 2 will feature Yunho and Choi Siwon displaying their action skills, which won them praise by the staff throughout the filming. Poseidon airs every Monday and Tuesday night, at 9:55pm. Make sure to catch this exciting drama!

Don’t worry fans! Despite the low ratings, viewers responded positvely to the series, making “Poseidon” a drama to watch out for in future ratings competition. “Poseidon” is just getting started; in contrast “Warrior Baek Dong Soo” and “Gyebaek” are well into their stories and have already established their audience.

Poseidon
Yunho
How does this article make you feel?