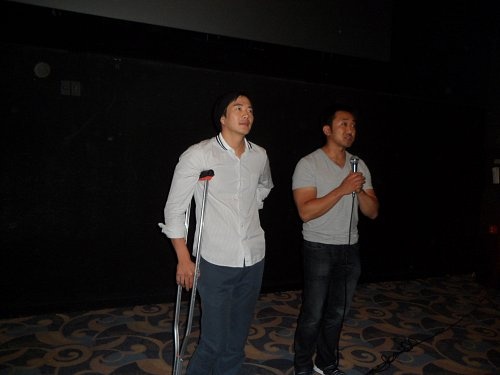 Despite his ankle injury, Kwon Sang Woo appeared at the stage greeting event for his movie, “Pain,” keeping the promise he had made with the fans.

It was his first official appearance after his ankle surgery. While he was advised not to attend the event, Kwon Sang Woo wanted to keep the promise he had made with his fans.

After viewing the movie, the audience was seen tearing up, touched by the film’s heartbreaking love story. Shortly after the movie ended, the lights came on and Kwon Sang Woo made his appearance. The audience at first screamed and cheered at the unexpected appearance, but after seeing the cast on his leg, gave him a standing ovation.

“Thank you for still watching ‘Pain’ even after it’s been released for 3 weeks,” Kwon Sang Woo said.

Ma Dong Suk added, “Sang Woo was injured more seriously than we thought, but he said that he wanted to come. I hope he gets better as soon as possible and as much as you guys love ‘Pain,’ I hope for the best that it will become more popular.”

Kwon Sang Woo first tore his ankle ligaments while filming the movie “Into the Fire” last year, and reaggravated the same injury last February at the set of “Pain.”