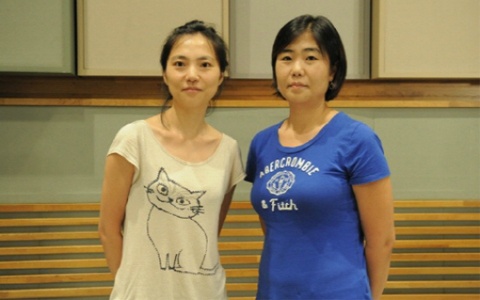 Hong Sisters Back in 2012 with Their Eighth Drama

Woot! No better news for the drama year to come. The Hong Sisters writing duo has announced that they’ll be back in 2012 with a new drama for KBS. Nothing else has been decided; just that they’re going to do a drama. But that’s pretty much enough to get the anticipation dial set to 10. The genre, the story, the stars… it’s anyone’s guess. Will it be another inside look at showbiz like “Best Love” or “You’re Beautiful?” Or a journey into fantasy like “Hong Gil Dong” or “Gumiho?”

People always call various actresses of the day “Rom-Com Queens” (or in Korean, Ro-Co Queen, which always sounds like “loco queen” to me). But I’d venture to say that the real queens of rom-com are the Hong Sisters (Hong Jung Eun and Hong Mi Ran), who have branded their own version of the genre, where the com isn’t just an afterthought. They’re known for a lot of things — their meta-on-meta in-jokes, their puntastic wordplay, their pop culture savvy — but in the end I think what makes them stand out is that they don’t forget the FUNNY.

So many dramas that call themselves rom-coms aren’t actually comedies at all. It doesn’t mean they aren’t good, but they’ve tended towards the lighthearted feel, rather than laugh-out-loud humor. Sometimes a Hong Sisters drama is as liberal with the toilet jokes as it is with the wordplay, but in the end, I never fail to bust a gut.

Here’s a refresher on their impressive resume of seven dramas over the last seven years:

Raise your hand if that just made you feel really lazy.

Already the speculation’s begun for possible leading men, because as we all know, having a swoonworthy leading man is pretty much a given in a Hong Sisters drama. Oh, like YOU wouldn’t use your powers as the queen of rom-com to hire your favorite actors over and over. Of course, it could be anyone, but they do like to reuse familiar faces. Let’s see… Lee Dong Wook just came back from the army and tangoed his way to the top of the hot guy food chain. Most recent second-lead Yoon Kye Sang is getting in more comedy practice with “High Kick.” Once-second-lead Lee Jun Ki is due out of the army in February. Oh, yeah, and there’s SEUNG GI. Do I need to show you the picture with the puppy again? Or maybe they’ll surprise us and go with someone totally new. I’m pretty sure I don’t care, as long as he’s what a Hong Sisters hero always is — funny, and HOT.