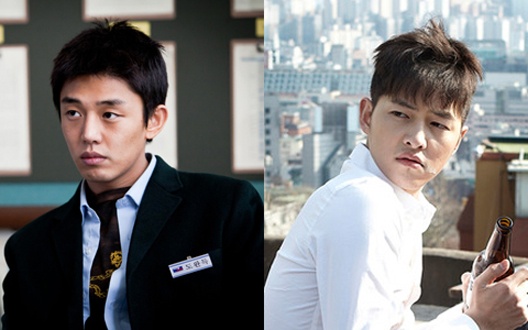 In 2010, KBS’ hit drama “Sungkyunkwan Scandal” (SKKS) caused a “SungS” mania across the nation, especially with the four leads Park Min Young, Park Yoo Chun, Yoo Ah In and Song Joong Ki, collectively known as the “Jalgeum Quartet” (“group of four irresistible men”) in the drama. One year on, they have starred in various premium dramas, released an album, found a boyfriend, and possibly hid a girlfriend (!) Right now, we’ll take a look at Yoo Ah In and Song Joong Ki, who are taking on the big screen with two movies of very different genres.

Yoo Ah In, the wild rebel “Geol Oh” in SKKS and many women’s hearts, has transformed into an angry high school teen in movie “Punch,” while Song Joong Ki, SKKS’ resident playboy “Master Yeorim,” became an unemployed youth in “Many A Little Romance,” a movie on the economy of love.

Screening first on Oct 20 is “Punch,” a story of Dong Joo (Kim Yoon Suk), a unique teacher who swears all the time, and Wandeuk-ie (Yoo Ah In), who is so frustrated with Dong Joo that he goes to church to pray for his teacher’s death. After many conflicts with Dong Joo, Wandeuk-ie eventually takes up kick-boxing, overcomes his difficult circumstances and realizes his dreams. Adapted from a 2008 bestseller that sold 700,000 books, the movie has earned rave reviews prior to its opening, and was rated 9.8 out of 10 by netizens after its movie preview screening.

Although “Many A Little Romance” will open on Nov 10, Song Joong Ki has already revived the “Gu Yong Ha syndrome” experienced during his SKKS days with his brief appearance as young King Sejong in current SBS drama “Deep Rooted Tree.” The romantic comedy “Many A Little Romance” will be Song Joong Ki’s first movie where he is the main lead, co-starring with Han Ye Seul.

“Many A Little Romance” is about how a stubborn miser (Han Ye Seul) and an unemployed man with a false front (Song Joong Ki) try to succeed in a project to earn 200 million won (~USD 175,000). Song Joong Ki abandons his pretty-boy image and becomes a glib, thick-skinned unemployed youth who makes philosophical declarations like, “In this world, there are things we want to do and things where we ought to do,” and “Even with no money and lots of suffering, people must love in order to live.”

Will this memorable “best couple” succeed in their big screen endeavors? Let’s wait and see!

Song Joong Ki
Punch
Sungkyunkwan Scandal
Yoo Ah In
How does this article make you feel?