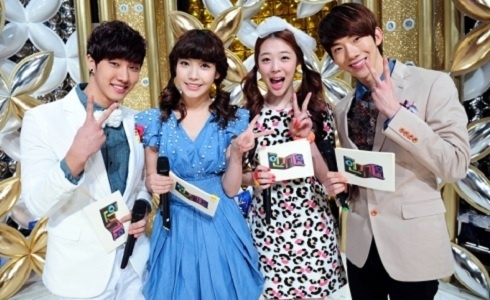 Sulli Will Be Leaving SBS Inkigayo

Sulli will no longer be one of the MCs for SBS “Inkigayo”, the popular weekly music countdown show.

On October 23, an aquaintance of SBS announced, “Jokwon, Sulli, and Kikwang will no longer be the MCs for SBS ‘Inkigayo’ due to their hectic schedules.” It turns out, this was due to some miscommunication –
only Sulli will be leaving SBS “Inkigayo.”

It was originally announced that Jokwon will be leaving due to the start of 2AM‘s promotions in Japan and
preparations for 2AM’s upcoming album. Kikwang also had similar reasons, but representatives who are
in charge of Jokwon and Kikwang’s activities immediately corrected this false rumor and announced that
even with hectic schedules, Jokwon and Kikwang will stay as the MCs for SBS “Inkigayo.”

Sulli on the other hand, will be leaving after being the MC for approximately one year and seven months due
to f(x)‘s plan on beginning their promotions in Japan next year.