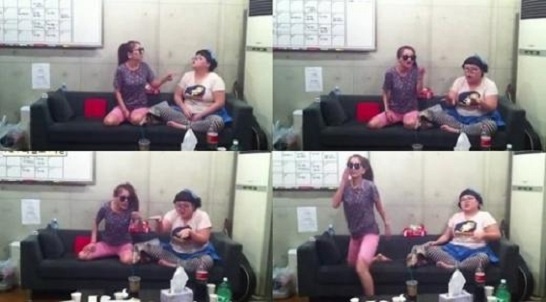 Brown Eyed Girls’ Jea showed an interesting way of playing inside of a recording studio.

A representative of Brown Eyed Girls stated on November 1 via twitter, “How Jea Nuna (Older Sister) plays in the recording studio. Fatty Gary Come On Baby, nice and beautiful girl Grande Fatty. Also, with Sooyeon who was a part of Bubble Sisters.” He posted the following clip that showed her fooling around.

In the video Jea and Sooyeon are singing a weird song called, “Fatty Gary Come On Baby, nice and beautiful girl Grande Fatty.” Jea can’t seem to control herself and she is going wild while singing.

Netizens that have watched the clip stated, “Their harmony is too good to say this is merely just playing around,” “It is so funny, I wish I could hang out with Jea for a day,” “Sooyeon it’s been a while,” and “Look at those hands! Jea has so much feel.”

jbarky is a senior editor for soompi.com (Also the BEST). You can email him at barkjason@soompi.com, or
follow his twitter.com feed at @jjbarky

Brown Eyed Girls
Bubble Sisters
Jea
How does this article make you feel?