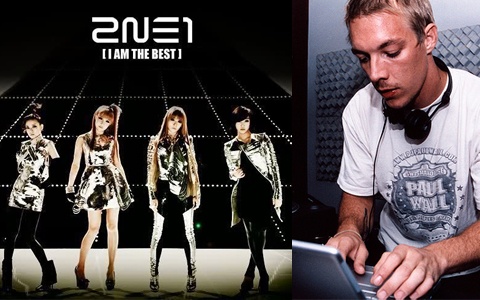 Last night, VIPs did their part to help Big Bang score a victory at MTV’s EMA awards in Belfast. As time ticks down, its Blackjacks chance to shine for the lovely ladies of YG, 2NE1. 2NE1 is up against nine other worldwide acts all competing for the title of MTV Iggy’s “Best New Band in the World.” Even though 2NE1 is in their sophomore year, and hardly new to K-Pop fans, they are new to the global world (outside of Asia) and this will be a well-deserved honor if they win.

American DJ, producer, and songwriter Diplo is well-known for his collaborations with some of the biggest names in music. He has worked with Shakira, Bruno Mars, Snoop Dogg, and even Beyonce. To YG Family fans and K-Poppers alike the DJ is known for his work with Big Bang’s duo, GD&TOP, on their single, “Knock Out” released last year. Diplo is now singing his praises for another YG Entertainment act, this time for 2NE1. The group and Diplo haven’t worked together (yet…) but it is no surprise that he finds them talented since 2NE1 has befriended and received accolades from various world famous musicians. Do I smell a future collaboration in the works?

Recently Diplo was asked for his expert opinion on this year’s MTV Iggy finalists. He even gave his own prediction as to who would ultimately take home the coveted prize. He described taking on the top group would be “like battling a superhero.” Here is a snippet of how he feels about the finalists:

2) “Stripped down to the bone” – La Vida Boheme

Do you agree with Diplo’s selection? To see exactly what Diplo has to say about each of the acts and who he chose as the “Best New Band,” check out the video below!

If you haven’t voted for your favorite finalist yet, you have two days left to do so. Click here to vote!

2NE1
Diplo
MTV Iggy
How does this article make you feel?