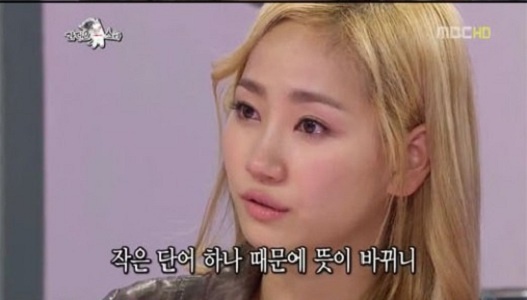 Wonder Girls Yenny Breaks Down While Talking about Life in U.S.

The Wonder Girls appeared on the November 17 episode of MBC “Golden Fishery – Radio Star” and were asked some tough questions regarding their U.S. promotions. The hosts of the show, Yoon Jong Shin, Kim Gu Ra, Kim Gook Jin, and Super Junior’s Kyu Hyun, joked about Wonder Girls’ U.S. promotions that in their words did not result in as much success as anticipated.

The hosts first started to mock the girls by saying, “If you guys (Wonder Girls) had stayed in Korea then you would have joined the recent K-Pop boom, but you picked the wrong time to leave,” and “At least if you had made a lot of money it would have felt better.” They followed up with the question, “What was the most difficult thing in the U.S.?”

After a brief moment of silence, Yenny opened up and said, “It’s hard to pick one thing but I would say the language barrier was the hardest.” And then she started to shed some tears as she said, “Language does not improve over a day. I could freely express myself in Korean, but to do it in English, I had to be careful with every single word and I was punished a lot for that.”

Sunye added, “People would just say anything because they don’t see any substantial results from our U.S. promotions, but that really hurt us a lot.”

Sohee also said, “We are very Korean-minded, so it took us a while to learn the U.S. customs. Our personalities aren’t even that outgoing, as opposed to a lot of Americans who are very extroverted. And so when they saw me being quiet, they would just think, ‘Oh, she doesn’t want to work with us anymore.’”

After becoming one of the most popular girl groups since their debut in 2007, Wonder Girls flew to the States in 2009 and mostly spent their time focusing on U.S. promotions. Despite enjoying some success – they ranked at #76 on the Billboard Music Chart – the Wonder Girls have been bashed by some for not making it even bigger in the U.S., a prime example being U.S. producer Teddy Riley’s tweet that said, “Wonderfuls just mad, Wonder Girls are flops in America and no one cares about them.”