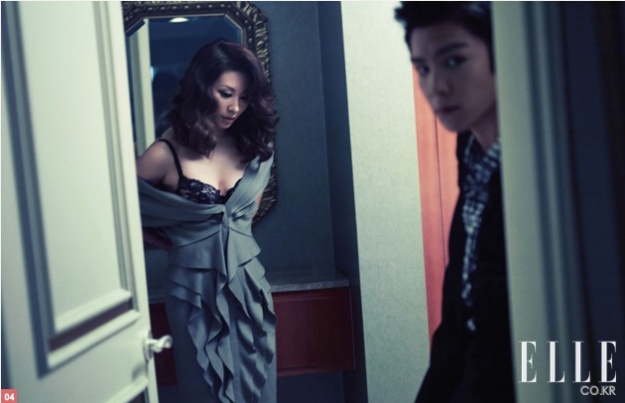 On November 23, veteran actress Kim Hye Sun (aka Korea’s Elizabeth Taylor, according to Yoon Jong Shin) appeared on MBC “Golden Fishery: Radio Star” as a guest and talked about a nude scene in her upcoming movie, “Perfect Partner.”

The 42-year old actress said it’s “one of those rare things” you do in your career. But she said there was a bit of hesitation initially after reviewing the script. However, the director of the film, who also happens to be her boyfriend, advised her, “There’s nothing a ‘real’ actress should be afraid of,” and so she took the role as a big challenge in her life.

But of course there were people opposed to the idea. Her manager, for example, was concerned of Kim Hye Sun tarnishing the clean and cute image she built over her 22-year acting career. She was able to convince him by saying, “The image I built over 20 years could remain the same, but with this scene, I would be adding an alpha – someone that’s not the real me to that image.” But the manager was still upset to the point where he had to run out of the filming set, weeping out of disappointment.

Now, for those of you who don’t know Kim Hye Sun, she’s a veteran actress who debuted in 1989. She won the “Best New Actress” award the following year and the Blue Dragon’s “Best Supporting Actress” award in 1993. In the early part of her career, Kim Hye Sun was a pop icon with a very sweet image (sort of like Lee Min Jung but less popular). Later in her career, she started playing a lot of older and classy roles.

So her nude bed scene comes as quite a shock to many because it’s something you would never expect from an actress of her status. It remains to be seen how it will be received by the fans, and how much she actually “reveals,” but one thing’s for sure – it generated a lot of publicity and her new movie will attract lots of interest, especially from the older male audience.

In recent years, we’ve seen some of the older, more experienced actresses take drastic turns by taking nude (or semi-nude) photo spreads, or filming bed scenes with a younger male counterpart. The first person that comes to mind is the 64 year old actress, Yoon Yeo Jung. In her 2008 film, “A Tale of Legendary Libido,” Yoon Yeo Jung plays an old woman that gets in bed with the male lead, Bong Tae Gyu. It is still regarded as one of the most surprising acts in Korean film history as the age gap between the couple was 34 years. She later admitted she had to do it for the money, but nonetheless she left a long-lasting impression in Korean film history.

Another example is Kim Hye Su. Despite her hot body and repeated calls by male fans to go topless, Kim Hye Su rejected all offers for sex movie scenes until her 36th film. Since her debut in 1986 at the tender age of 17, Kim Hye Su starred in countless movies and TV series, becoming a popular teen idol star in the 80s and 90s. But in 2004, through the movie, “Hypnotized,” she finally filmed a bed scene, reinventing her image as a sexy yet confident woman. She went nude again in 2006 movie “Tazza: The High Rollers,” which firmly cemented her title as the “Sexiest Female Movie Star” in Korea.

Lee Mi Sook is another actress that comes to mind. The 51-year old actress recently took a photo shoot with Big Bang’s T.O.P for the fashion magazine Elle, where she appeared in only lingerie. The much-respected actress is still considered a sexy icon by many for her sophisticated looks, so she was able to easily overcome the 27-year age gap. The pairing was a success since Lee Mi Sook’s charismatic looks and T.O.P’s tough image created a perfect match.

But Lee Mi Sook’s 1998 film “An Affair” with Lee Jung Jae was perhaps what started this whole “veteran actress sex scene” movement. The movie is about her falling in love with the fiance of her younger sister and how the doomed relationship develops. At the age of 38 back then, Lee Mi Sook brought shockwaves through the Korean movie industry, not just because of the movie’s startling adultery storyline but also her stunning bed scene.

Kim Hye Sun reminded me of the conversation that took place during last week’s SBS “Strong Heart.” Kim Ji Hyun, the lead vocal of 90s pop group Roo’Ra, was on the show and she said her 2001 film “Summer Time,” where she went completely nude for the first time, was one of the most frustrating things she’s done in her life. “Summer Time” was a total disaster and the only thing that really left an impression was Kim Ji Hyun’s nude scenes. Back then, she was getting past her prime but still popular, and according to her, she thought that movie would open up a new career as a movie star. However, now she’s left with endless reruns of the movie every year during holidays and embarrassed looks from her friends.

But Song Chae Hwan, who was on the same “Strong Heart” episode, shared a different story where she said she regretted having her bed scene deleted from “The General’s Son 2.” The highly praised movie series later received countless awards, but Song Chae Hwan was never awarded anything, in part due to the deleted bed scenes. She said her role would have been much bigger had the bed scenes been included, and it would have added to the overall flow of the storyline, thus earning her more awards and recognition. However, the director mistakenly deleted all the bed scenes and she missed out on an opportunity to win some prestigious awards.

It’s hard to measure the effectiveness of these moves. It’s an easy and simple way to spark the public’s interest, but at the same time, it could tarnish the image as an actress. In particular, for a veteran actress to do so in a conservative Korean society could put a real a damper in her life as an actress. Of course, it should be included if it’s necessary for the overall storyline and expression of characters, but it should be done with caution as, again, it could leave an indelible mark in their long, illustrious careers. What do you think of these moves? Does it help them in any way?