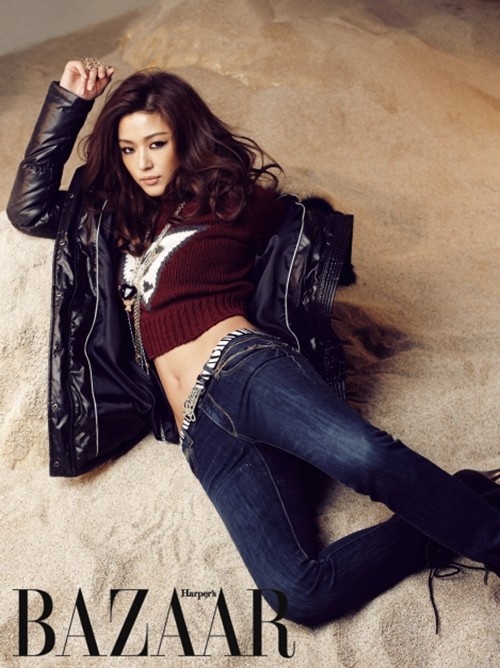 The clothing was very casual. In the picture below you can see her wearing a short knitted sweater that is a red wine color, and a black padded jacket over it. She is also wearing blue jeans finished off with a zebra skin-like belt. The pose is the epitome of sexy as she is slightly curving her back on the sand. The picture clearly shows off her S line.

In other Jeon Ji Hyun news, her cast-mate on the film “Thieves,” Kim Yoon Suk (He appeared on “Punch” and “The Chaser”) spoke about working out with Jeon Ji Hyun in a recent press conference. He said, “I lost 12 kg for my role in ‘Thieves,’ in my contract it specifically stated that I needed to lose weight. When you have Jeon Ji Hyun next to you, you can’t help but work out. She is a sports mania and also knows a lot about the proper form for working out. She taught me a lot.”

The film “Thieves” will be released in early 2012.

Harper's Bazaar
Kim Yoon Suk
Punch
How does this article make you feel?