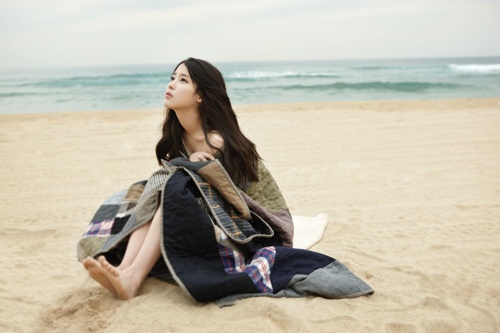 IU, who has risen to fame with “A Good Day”, has returned with her second album titled, “Last Fantasy”. The singer has worked with Korea’s top musicians and composers such as Lee Juck and Ra.D. There are a total of thirteen tracks in this album.

Apink, who had debuted this past spring, has returned with its second mini-album, “Snow Pink”. There are a total of five tracks with the title track being “My My”. The song was co-composed by Korea’s hit maker Sinsadong Tiger and Rado.

B2ST’s Jang Hyun Seung (JS) and 4Minute’s Hyuna have come together with a special project group called Troublemaker. The title track is of the same title as their group name, Troublemaker, and it was co-composed by hit maker Sinsadong Tiger and Rado. It has funky rhythms along with electronic sounds that is expected to make everyone get up and dance. In addition to the title track are beautiful ballad number “Words I Don’t Want to Hear”, as well as JS and Hyuna’s solo tracks, “Nothing’s Wrong” and “Time (feat. Rado)” in its respective order.

Hip-hop group, Dynamic Duo, who is celebrating its tenth year anniversary in the music business has returned with its sixth studio album, “6th Digilog ½”. The title meshes the words “digital” and “analog” together to show fans that the artist worked with both digital sounds as well as actual instruments to produce music. Top musicians and composers such as Mad Soul Child, Primary, and Planet Shiver to name a few have participated in this album. The title track this time around is “Friday Night”.

Ji Hyun Woo, who is currently an actor as well as the drummer for the band, The Nuts has released his first single album, “Crescendo”. There are a total of three tracks with the first one being “Baby Elephant”. It is an exciting number that compares what nagging couples do with the footsteps of a baby elephant. The singer’s nephews and nieces took part in the chorus. The second song is “Good Addiction”, a song about confessing one’s love. The acoustic arrangements are key to this song. Last but not least is “Ahiyah”, a song with band sounds. It is the perfect song for people who are currently exhausted with life.

YB, who is constantly making new styles of music, has released a new mini-album titled, “Blue Whale”. The artist got this idea when he was watching a documentary on blue whales. Blue whales are the biggest mammals on earth, but are one of the most peaceful animals as they only eat krills and don’t mess around with other animals. However, they are an endangered species. YB compares people with the blue whale, depicting how the “big” friendly people are the ones who receive hurt and pain from the stronger people. In the title track, “Blue Whale”, YB hopes that these “blue whales” will find their ways out of pain and win in life.

Starship Entertainment, which consists of K.Will, SISTAR, and Boyfriend, has released a digital single, “Pink Romance” in time for the winter. This song is for the fans as a special gift of appreciation. It is a romantic proposal song with acoustic guitar and bass accompaniments. The meaningful lyrics and sweet melody of the song is expected to warm the hearts of many this winter.