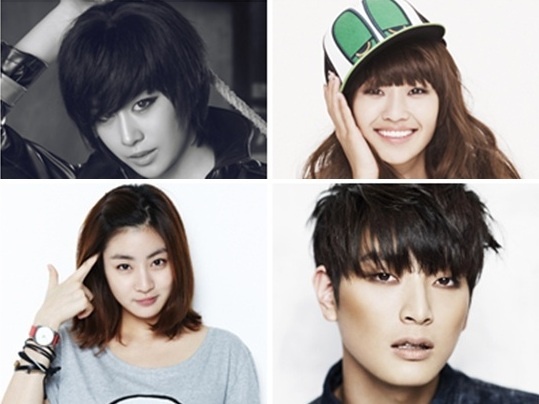 The four main lead roles for the upcoming KBS drama “Dream High 2” has been finalized, raising the anticipation level for the highly popular teen drama. SISTAR’s Hyorin, 2AM’s Jinwoon, T-ara’s Ji Yeon, and actress Kang So Ra will play significant roles in the second season of “Dream High,” bringing yet another star-studded lineup to the show.

Kang So Ra will play the role of Shin Hye Sung. After making her name through movie “Sunny” and MBC “We Got Married,” Kang So Ra has become one of the fastest up and coming actresses in the industry. “So far I only focused on my acting, so I feel pressure that I have to give dance performances too. But I think it’ll be a huge challenge so I feel both nervous and excited,” she said.

2AM’s youngest member Jinwoon will star as Jin Yoojin, a troublesome kid that aspires to be a rock star. “When I first read the script, I was really attracted to the rock star character. Especially, the fact that we’re both huge rock fans pulled me into the role. I’ll do my best to play it as best as I can,” he commented of his casting.

T-ara’s Ji Yeon is slated to play the role of Rian, a member of girl group Hush that dreams of going to the Cannes, despite her shortcomings in acting. She’s already appeared in several TV dramas, which brought positive reviews, and is expected to add strength to the drama series with her mature acting.

Nana, a gifted singer with various skills, will be played by SISTAR’s Hyorin. Nana is the lead vocal for Hush, but has a secret past and is expected to play a key role in turning around the storyline at the end of the season. “I feel more attached to the Nana character because we have similar personalities. I look forward to it,” she said.

The first season of “Dream High” cast some of the most popular idol stars, including 2PM’s Taecyeon and Wooyoung, miss A’s Suzy, T-ara’s Eunjung, IU, and Kim Soo Hyun, leading to some of the highest TV ratings. In addition to these four stars, Park Jin Young, Choi Yeo Jin, and Kim Jung Tae have also joined the casting crew for Season 2. The first episode will air on January 30, so stay tuned for more information!