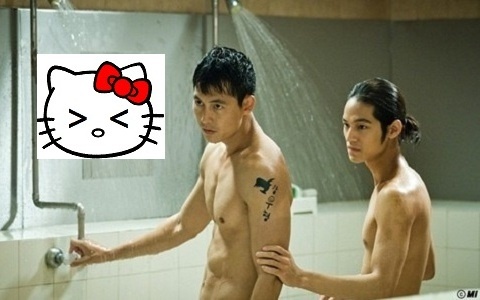 For a while now I’ve been looking for a show that I really wanted to recap. I have finally found that show with “Padam Padam.” In a nutshell, this show is a mix of Charles Dickens “A Christmas Carol,” the film Family Man, and It’s a Wonderful Life with a Korean twist.

By Korean twist I mean, all the profanity, protagonist kicking guardian angel, guardian angel beating the crap out of the protagonist, female lead flipping a bird, and whatnot. (Sounds interesting no? The show got me hooked!)

Gooksu (Played by Kim Bum, yes the character’s name sounds like the Korean word for noodles)

Basically, Kangchil has been incarcerated for most of his life after being framed for killing someone when he was only 19. Gooksu is supposedly Kangchil’s guardian angel, and Jina is the love interest. Through the drama we find out how these characters are interconnected and it is PRE-TTY entertaining ;).

Ok so here it begins!

The drama begins with Kangchil is awaiting his execution. He is asked, “Are you going to pray?” and the drama jumps back a month….

Kangchil and Gooksu are both on parole. (They have about a month left before they are released from prison) Instead of those nifty ankle bracelets, they get cellphones and have to check in whenever they get a phone call. The two are generally excited about going out into the real world, for Kangchil this would be his first after about 16 years. A longa*s time! Gooksu insists that the two hold hands as they travel back home together.

In the subway everyone is annoyed as the two men will not let go of each other’s hand. Kangchil goes near the entrance/exit and he runs into the female lead, Jina! (Of course, the two don’t know each other at this point) The subway is very crowded so the two begin to make an R&B music video.

While they are bumping and grinding, Kangchil repeatedly says that he is sorry and is not doing this on purpose. (Snicker) While Jina demands that Kangchil should just let go of Gooksu’s hand. Kangchil even ends up smooching her on the forehead! (K-close!)

Gooksu is observing the situation and he exclaims, “She is his destiny.” (Before I watched the 2nd episode, I thought he was set up as a gay character.)

While the two are on a bus, Kangchil ditches Gooksu because he wants to go meet another former inmate that promised booze and girls!

After freshening up at a motel/hotel? Kangchil goes to see his former inmate friend, to get his drink on! Then he runs into Jina again! (You know this used to irk me when I recapped City Hunter, now that sh*t don’t phase me no more) Anyways, Jina is arguing with a guy that stole someone else’s puppy! (The drama is setting up Jina’s love for animals and her kind personality) Kangchil helps Jina out and she runs off. Kangchil also finds a stranger that is following him, so Kangchil chases after the man!

What happens? You guessed it, Kangchil and Jina run into each other again! We find out that the ajushi who stole the poodle is actually a dog catcher, taking stray dogs to be sold to restaurants that cook dog stew! The ajushi comes close to finding the two so Kangchil acts like he is making out with Jina.

Kangchil finally goes to meet his former inmate friend, but alas! The friend is talking smack about Kanchil even though he saved his life twice! So what does a man do who has been cooped up for 16 years? Break Sh*t!!!

The next day Kanchil goes to see Lim Soo Mi, a girl he knew before. But, she had passed away while he was locked up!

When he tries to leave he is stopped by a lady. She explains that Lim Soo Mi got pregnant while Kangchil was locked up and had a son. The son is supposed to be Kangchil’s, but he doesn’t believe this at all. He screams “I only slept with her one night and she went off to another man!!!!” Outside, the son chases after Kangchil to spit in his face. So what does Kangchil do? He spits back at his supposed son’s face. (Classy!)

While Kangchil is walking back to his motel/hotel he is run over by a car! Who was driving the car I wonder?

Dun dun dun, she calls an ambulance and Kangchil is treated at a hospital. However, when Kangchil wakes up he is shocked and surprised. He runs out of the hospital!

On his way out he recieves a call from a mysterious person. Kangchil recognizes the voice as his friend back when he was 19 who framed him for murder! 19 year old Kangchil was unconcious with somebody else, and his friend/soon-to-be-enemy was holding the knife! He put the knife in Kangchil’s hands and ran off!

It looks as though that friend wanted to keep Kangchil in jail, as he has become a prosecutor now! Kangchil is stumped however, ‘What do I know that could scare somebody like you?”

Anyways, Kangchil ends up going back into prison because his brief parole/vacation is over. On their way back, Gooksu tells Kangchil that he is an angel (@_@) and Kangchil does not believe Gooksu at all.

Now with only a week left in prison, another inmate is trying as hard as he can to piss off Kangchil. His master plan is to instigate Kangchil, make him do something stupid, and keep him in prison.

Well, the other inmate succeeds by ticking off Kangchil when the inmates are outside. Although Gooksu tells Kangchil to let it slide, Kangchil says “I am going to stay in here forever! Let me at em!” Kangchil and the other inmate go at it with each other, but Kangchil hits a prison guard (the guard who let Kangchil and Gooksu have parole/a vacation) who hits his head on cement and dies! So Kangchil has now commit murder in prison!

Kangchil is numb, and during his defense trial he doesn’t even want to fight his death sentence. So, we swing back full circle to the scene where Kangchil is about to get hanged. Ahh yes, now we know why!

Kanchil is executed and the drama is over!

Haha… sorry had to try

Kangchil is freaking out because he starts to time travel back to the point where he f*cked everything up. Gooksu is telling Kangchil to ignore everything. Kangchil looks at Gooksu exclaiming, “WHAT THE HELL IS GOING ON?!?!”

I’ll be honest, I am a big fan of Kim Bum and Jung Woo Sung. I’ve liked Jung Woo Sung’s movies and his acting since I was in middle school. Regardless, his acting has really improved as this drama was crazy entertaining! The next episode recap will be posted the next day, hope you enjoyed!

Click Here to Move on to the Next Episode!