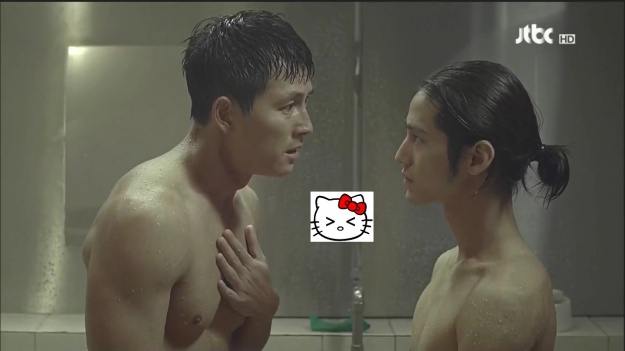 The hallmark of a great drama is when you see the main character beat up his guardian angel, and also when you get to see a guardian angel beat up the protagonist that he is supposed to protect.

Anyhooters, last week we ended off with Kangchil dying. After he died though, he seemed to warp past time back to the shower scene with his guardian angel, Gooksu. Kangchil is in awe/shock/horror because he doesn’t know what the hell is going on, and he is trying to tell Gooksu about his situation!

Kangchil points at his neck saying look, I have noose-marks on my neck! “I DIED!” Gooksu gets angry and screams back, “You didn’t die, you probably just want to! Listen to everything you are saying, you could have avoided that whole situation. What is the problem, be honest, you really want to die no? You are afraid of going outside into the real world, you want to get your revenge but you have no way. So you’d rather die!”

Pretty convincing untill he busts out his angel rock while running outside and blows onto it. (Pretty sure some girls are envious of the rock �de09

For Kangchil however, everything is happening all over again, like dejavu on crack!

So…. Kangchil pauses right before he’s about to punch the guard in the face and kill him…. But he doesn’t!

And the angel rock starts to glow… ooooh… My Preccciousssss, Kangchil is in a daze.

Kangchil begins to question whether Gooksu is a normal human or angel. Gooksu plays around with Kangchil giving him reason to believe that he is not an angel. When Kangchil becomes really doubtful, Gooksu suddenly explains, “I have finally become the angel that I prayed to become. You will have two more miracles because life always gives you three chances.”

Once the duo gets out of prison, Gooksu tells Kangchil, “Don’t forget the lesson you learned from your first miracle, your will let you live. Your will to live a good life.” When they are both walking out to catch the bus, Gooksu exclaims that he is going to follow Kangchil around everywhere he goes.

As Kangchil is in the bus with Gooksu, he proclaims that he is going to fight against the dirty and gritty real world. Gooksu complains, and begins to jot down some black stars in his diary. (Gooksu has this diary where he seems to score Kangchil’s good and bad deeds, much like Karma.)

Once they get off the bus, Kangchil shoves money into Gooksu’s pocket, exclaiming things like “Angel my a*s!” Kangchil tells Gooksu to go away but Gooksu is adamant that he will stick by his side. So what do you do when your guardian angel won’t leave you alone? You beat the crap out of him!

There was another funny scene where Gooksu actually caught up to Kangchil, but he had to go to the bathroom. So, Gooksu dragged Kangchil in, and right when Gooksu was doing his business, Kangchil ran off again. But, while he ran off, he noticed that he was being followed! So what do you do?

You beat the crap out of the man who is following you, and then you send a message to your arch-nemesis, “I’m gonna GETCHA!” The evil Changul gets the phone call, and when he hangs up, look who he runs into!

Ahh it looks like Evil Changul and Jina’s father are connected! Jina’s father is a detective and Changul is a prosecutor. (So duh I guess) The two have worked together on the recent drug case.

Meanwhile, Gooksu just misses Kangchil. As Kangchil gets away on a bus, Gooksu sees a weird vision. It looks like Gooksu or another guardian angel is with Kangchil’s son. Gooksu exclaims, “Who is that?” and the vision goes away.

Jina is home and she is looking at a picture of her father and younger uncle. So there is our connection! The person that Kangchil was framed to have murdered is non other than Jina’s uncle! We are treated to a flashback of Jina’s father beating the crap out of Kangchil. (Really harsh teenage life man) The younger Kangchil is begging for his life.

Kangchil has gotten off the bus and he is walking aimlessly.

Jina meets up with her father, and he is pretty wasted. Her father asks Jina to wait an year before she goes overseas to study because he wants to go with her. Jina refuses and tells him to just leave her alone. She has already listened to him for a big chunk of her life. The father becomes furious, “Why do you act like I killed your mother!” We find out that in a way he was the cause, because he got angry and had an argument with Jina’s mother while she was driving. Jina’s mother had an extreme case of asthma and she died because of stress (?). Jina is angry and driving way.

Jina’s car breaks down in the rain! The dog she was with also ran off! (The hound is special, he/she is getting trained to help out blind individuals.) Where is the dog going?

Remember kids, we are watching a K-Drama!

Of course, the dog ends up at the little hut where Kangchil has made a fire. Kangchil and Jina finally get the chance to talk and it is mad awkward. Jina does however thank Kangchil for the other day with the dog-catcher. Kangchil makes the mistake of letting Jina know that he just got out of prison, also that he likes girls, and that he seems to be a pervert as well. Jina is about to leave because she feels uncomfortable, scared that she might get raped or killed. But, Kangchil says that he will go out instead. Jina asks the dog to follow him.

The dog is extremely smart as it follows Kangchil around, then leads him to Jina’s broken-down-car. So what does Kangchil do? He fixes the car!

The next morning she starts the car and it is fixed. Kangchil seduces her by showing off his abs and asking for a ride.

That’s not what actually happened, he just kind of pulled up his wife-beater, flahsed his abs, and mumbled, damn I dont’ have any money and could really use a ride.

Jina does give him a ride, but she stops right in front of a police station. She puts about $50 in his lap and tells him to get out. Kangchil doesn’t want to take the money, or leave. However, Jina points at the police station and tells him it’s either that or leaving with money. Right when Kangchil is about to protest, she screams out to the policemen, forcing Kangchil to hurry on out.

Kangchil arrives near his home, and is looking out at sea (His family probably buried his brother’s ashes in the sea?) and reminiscing about his brother. Kangchil says, “Why did you die for me? When I get a job, I will come by again with your favorite crackers and soju.”

Kangchil returns home it seems to his mother, who is selling fish. However, she acts like she doesn’t know him. (Obviously the two haven’t spoken since Kangchil’s older brother’s death.) Kangchil is furious and begins to throw arouns boxes and fish! Uh oh, looks like Kangchil might get in trouble, because all of these other people are starting to gather around. Where is his guardian angel?

Gooksu arrives just in time and begins to beat the sh*t out of Kangchil. He tells Kangchil, “Just stay put,” (While I beat you to a pulp) “If people call the police you’ll end up in jail, this is better.” Gooksu runs off again (talk about deus ex machina) and Kangchil’s ex-girlfriend (when they were 12) arrives to help him out.

Kangchil is taken to an animal hospital run by, DUN DUN DUN none other than Jina!

While he stil can’t open his eyes, he sees Jina’s hand and I think his mind is going through a memory of  *correction* Jina’s mother. Right before Jina’s face is in focus, he says “Who are you?”

I have to say, although this drama is more like scifi/fantasy because of having a guardian angels, and miracles and all that crap. It still rocks! I especially like the drama because the characters swear all the time, and Kangchil is also unpredictably predictable. Honestly though when Gooksu appeared out of the blue and began to whomp on Kangchil, I laughed like a little girl. (So silly, but funny!)

I think this infatuation with me and people fighting angels stems from my deep love for Supernatural. There you see that kind of stuff all the time, it was a novelty, I mean the thought itself is so blasphemous it rocks!

Click Here to Move on to the Next Episode