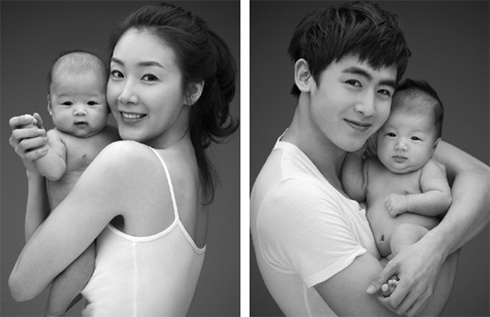 More Photos of 2NE1, Nichkhun, Tiffany and Other Celebrities for "Letters to Angels" Are Revealed

With the exhibit date drawing closer, the “9th Letters to Angels” campaign for domestic adoption is starting to gain more and more attention, thanks to the participation of top artists and celebrities.

“I’m impressed by these stars who hold these orphaned babies for two to three hours, feeding them milk and soothing them, even before shooting,” photographer Cho Sei Hyun, the man behind the charity project said in a broadcast on YTN. “This time, I’m most impressed by the transformation in (SNSD’s) Tiffany.”

He also publicly thanked respected actress Kim Hye Soo, who has supported the campaign for the past three years.

“I’ve been holding exhibits every year, but I hope I won’t have to—that there wouldn’t be any more babies up for adoption,” local news agencies quoted the photographer as saying. “Through this exhibition, I hope more children grow up well-loved by finding good homes and families.”

The idea came to him when a social worker asked for his help in taking a photo of a 100-day-old orphan up for adoption.

The “9th Letters to Angels” exhibition, with the theme “eyes,” will be at the Insa Art Center in Seoul from December 14 to 19.