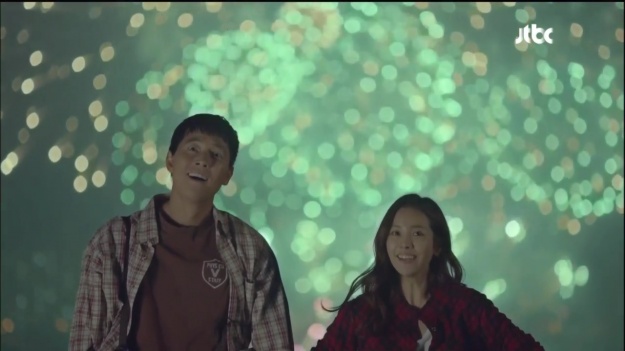 We left off in the previous episode with Kangchil asking Jina an important question. Basically, is it possible for salvation, can somebody in his situation fall in love with somebody? (Particularly would Jina accept somebody like him?)

Well Jina doesn’t really reply, instead she asks why Kangchil (Actually she is referring to Kangchil’s friend, but in fact Kangchil is talking about himself, if you don’t get it, check out the previous epsiode recap) hasn’t had the chance to ever date. (Jina seems to know that Kangchil is talking about himself) Kangchil then explains that he was in prison for the most of his life for being framed. Jina changes the topic to the interior of Kangchil’s project.

Kangchil keeps nagging Jina to join him to find the wood and materials for building.

Kangchil gets to meet his ex-girlfriend’s baby, she has also lent Kangchil a truck!

Gooksu has chased down Kangchil’s son, Jung Yi, he nags him to go live with his father, Kangchil. (We find out that Kangchil’s son is a genius) It looks like he is living with the person that knew his mother. But, that lady’s husband isn’t on good terms with Jung Yi.

The two are looking around places and Jina exclaims that she will be waiting in a cafe. She is a little upset that Kangchil seems to be goofing aruond.

Kangchil gets everything ready and goes to see Jina again. Jina asks about the plans and everything, Kangchil explains that it is all in his head. We find out here that Kangchil is actually somewhat of a genius who nearly has photographic memory. (Like father like son I guess, meaning Kangchil’s son) Jina is clearly impressed.

Jung Yi and Gooksu watch the couple that Jung Yi is leaving with, it seems like the husband wants to get rid of Jung Yi. Gooksu suggests that they leave, that Kangchil will send Jung Yi to college. However, the way Jung Yi says it is in rude way. Jung Yi says that the only reason why he would move in with Kangchil is revenge. Revenge for leaving him and his mother. What does our angel say to that?

“Revenge? That is a great idea!”

The two have been shopping when they suddenly hear fireworks, Kangchil has never seen it in his life! So, Jina suggests that they go to the nearest rooftop!

After Kangchil sees the fireworks he exclaims, “Wow! I need to live a good life, if I want to keep seeing things as amazing as this!”

We get to see Gooksu’s premonition. It appears that our angel can see the future! Jung Yi and Gooksu are going up to Kangchil’s home.

Once Gooksu arrives and sees Kangchil, he tries to convince Kangchil with the soundness of his plan. Basically they will use the son, while the son will use them to go to a good university. Kangchil doesn’t like the idea and even when he agrees to it, he is doubtful that Jung Yi will give up part of his liver. So what does our angel say?

“Give him love and time, he will come around eventually.” SOOOOOOOOO DEVIOUS

Jung Yi finally gets to meet his grandmother and his new home. He screams, “You tricked me! How are you going to send me to the U.S. when you live in a place like this?!?!”

Kangchil was checking out his workshop, and Jina was trying to get rid of traps in a mountain while giving out feed in order to protect the wildlife. While Jina ran away she got caught in her own trap. The smart dog that she was with, finds Kangchil and makes him come along. Go Lassie!

Kangchil gets a lot of chances to do some skinship. He is piggybacking her all the way back to her place! (What happened to the truck, or is he doing this on purpose?!? I couldn’t figure it out)

Kangchil gets the chance to carry her a different way while he goes back to her home. Once there, they run into Jina’s boyfriend and her father. However, Kangchil and the father haven’t properly met. (As Jina’s father is too drunk, and it would be a shame for something like their meeting to happen so early on.)

Kangchil hears somebody scream out his name. Kangchil thinks that it is another one of Evil Chan Gul’s henchmen. Kangchil exclaims that he is going to kill him and chases after him.

Gooksu seems to be having a nightmare about this whole situation.

We are treated to an important flashback! This is Yong Hak looking at the situation, Evil Chan Gul has stabbed Jina’s uncle, Kangchil is on the floor with him.

Now we are back at Kangchil’s court case, when Yong Hak is asked who the killer was, he points at Kangchil!

Yong Hak takes off his hat when he stares down Kangchil and merely says, “Kangchil! It’s been a while! You didn’t forget me right? It’s me Yong Hak”

Kangchil tries to chase down Yong Hak but he suddenly gets hit by a truck!

The ending was kind of weird in that he suddenly falls into water. (There wasn’t any water around the scene right before he got hit by the truck!) So, I am assuming that this is metaphorical and going on in Kangchil’s head!

Honestly I liked this episode a lot better than the previous one. For me I just love Kim Bum’s character, it is so awesome! I mean just think about it, he is supposed to be an angel but he is trying to arrange a deal with Kangchil’s son so that he will give up his liver, in exchange for a real family and opportunity to go to the U.S. We all know this is going to backfire!