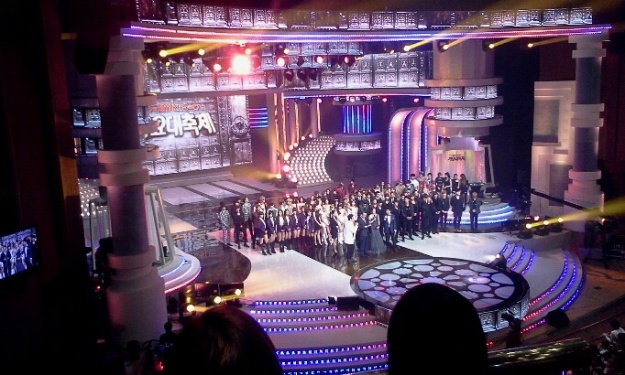 ﻿After SBS’ music festival, it’s KBS’ turn to put on a show for K-Pop fans. With the theme of K-Pop as a Hallyu frontrunner, the 2011 KBS Gayo Daejun gathered the top idols for a two-hour show of hit songs with a smattering of special numbers.

It’s a big night for BEAST and B2TYs as “Fiction” was named 2011 KBS Song of the Year, as selected by votes.

The show opened with “Empire of K-Pop,” featuring a parade of the evening’s artist line-up. Infinite then kicked off night’s performances. T-ara, Davichi, BEAST, SISTAR, Kim Hyun Joong, Lee Seung Gi, miss A, 4Minute, U-Kiss and Clover came one after the other.

Infinite, “Paradise + Be Mine”

The first part ended with “The Lady’s Night,” a girl group tribute to K-Pop diva Uhm Jung Hwa. Wonder Girls, T-ara, Secret, and SNSD covered some of the pop icon’s most popular hits. 2PM and MBLAQ joined Uhm Jung Hwa herself for a powerful close to “Empire of K-Pop.”

Wonder Girls, “Do Not Wish to Know”

T-ara, “Betrayal of the Rose”

Building up from “Empire of K-Pop,” the second half of 2011 KBS Gayo Daejukchae set off with a special dance shuffle remix from DJ KOO featuring Visualozik and the year’s hits from f(x), 4Minute, Infinite, IU and Super Junior. The idols came together for a group dance to usher in the second half, “K-Pop to the World.”

Kim Hyun Joong came back to start off the second part. The Wonder Girls, MBLAQ, f(x), Secret, DBSK, CN Blue, IU and SNSD performed one after the other. 2PM and Super Junior wound out the night’s festivities by livening the crowd with their energetic numbers.

Wonder Girls, “Be My Baby”

DBSK, “Before U Go + Keep Your Head Down”

An “Immortal Song Special” put the spotlight on veteran singer Shim Soo Bong. Her songs are sung from the younger generation of singers Davichi, SISTAR, CN Blue and BEAST.