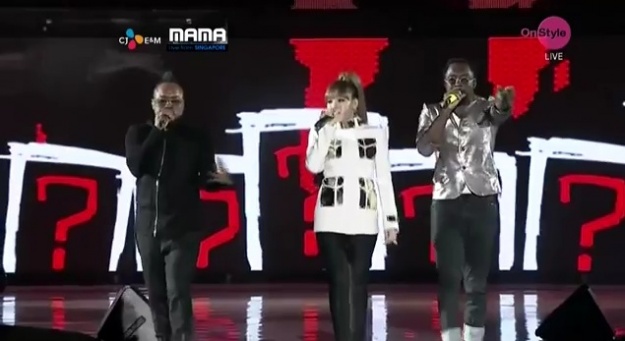 CL, Will.I.Am, and Apl.De.Ap’s “Where Is the Love” Picked as Best International Collaboration

Remember when 2NE1’s CL stood on the same stage as the Black Eyed Pea’s Will.I.Am and Apl.De.Ap for “Where Is the Love” at the 2011 MAMA? We thought CL totally nailed that performance, and MTV Iggy apparently thinks the same way too!

2NE1’s CL and the Black Eyed Pea’s Will.I.Am and Apl.De.Ap were picked #1 on the MTV Iggy’s “Top 10 International Collaborations That Blew Our Minds in 2011” list. It described the performance as: “The K-pop star brought freshness to The Black Eyed Pea’s “Where is the Love” when she performed at the Mnet Asian Music Awards (MAMAs) with Will.i.am and Apl.de.ap. We loved her soulful vocals and urgent rap verses, but we really loved that this pairing was no coincidence. It was a reminder that the Will.i.am-produced 2NE1 album has been recorded and is now awaiting release. Now, there’s an international collaboration we can’t wait to hear.”

We’ve been waiting for the release of their collaboration album all year, and if this performance is any indication, we should be able to see it come out some time very soon. It’s great to see 2NE1 continue to gain international acclaim, as they were also featured in a BBC News report earlier this week.

Other notables to make the list include, Yukimi Nagano and SBTRKT, Superheavy, and Bjork and Omar Souleyman. You can see the full list here!