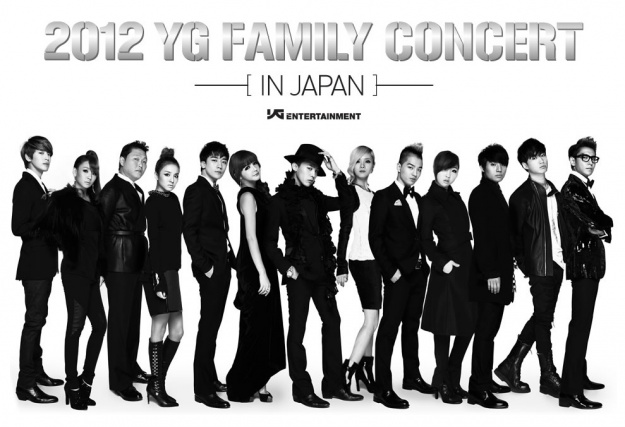 YG Entertainment’s two city concerts in Japan are expected to pull in more than 30 billion won ($26 million USD) in revenue.

YG Entertainment is preparing for their YG Family 15th Anniversary Concert, which kicks off this weekend. The YG Family will be performing at the Kyocera Dome in Osaka, Japan on January 7 and 8 in front of an anticipated crowd of 80,000. The same is estimated for the shows scheduled for January 21 and 22 at the Super Arena in Saitama. In total, 16 million spectators will be in attendance for the two city tour.

Face value of the tickets are at $167.00 USD. The total for all tickets sold comes to 2.048 billion yen, which is approximately $26 million USD. This amount does not include the total revenue made from concert merchandise sales.

Back in 2005, YG Entertainment set their sights on Japan with Se7en, and it’s been six years since the YG Family last held a concert in Japan. They performed sold out concerts in Tokyo and Osaka back in August 2006.

Last year, YG Entertainment and Japan’s largest music label, AVEX, came together to form YGEX. This tour will mark the first concert in Japan since the creation of YGEX. In the six years since YG began promotions in Japan, the popularity of YG artists has only grown substantially, and there is much anticipation surrounding this tour.

The 15th Anniversary YG Family concerts were a great success domestically. Jinusean, Se7en, Gummy, Big Bang, 2NE1, as well as YG Entertainment’s newer members Psy and Tablo; all preformed for their Korean fans this past December. The performances at the Olympic Gymnastics Stadium in Seoul were met with scores of eager fans.