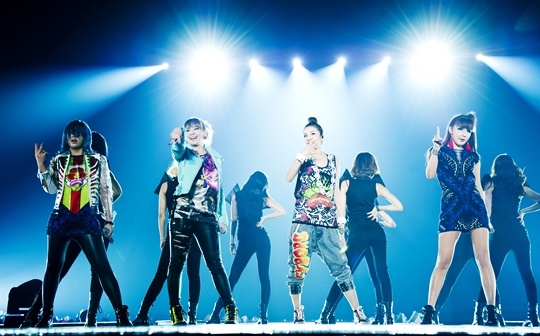 2NE1 kicked off the concert with “Fire,” followed by performances by Big Bang which instantly turned Osaka’s Kyocera Dome into a giant club scene. Se7en, who’s releasing his new Japanese mini album on January 18, followed with Japanese versions of “Somebody Else” and “Better Together.”

Tablo, Psy, and Gummy all gave impressive performances, mixing in some of their old hit tracks and even some parody stages. JinuSean, in particular, brought back memories with live performances of “Phone Number” and “A-YO.”

There were also some special collaborative stages, as Big Bang’s Taeyang, Daesung, Seungri and Se7en did covers of 2NE1’s “Lonely” and “It Hurts.” Gummy, Park Bom, and Taeyang also joined hands for a variety of special joint performances, leaving the sellout crowd off their seats for the entire three and a half hour extravaganza.

The next “15th Anniversary YG Family Concert” will be held on January 21 and 22 in Saitama, Japan.