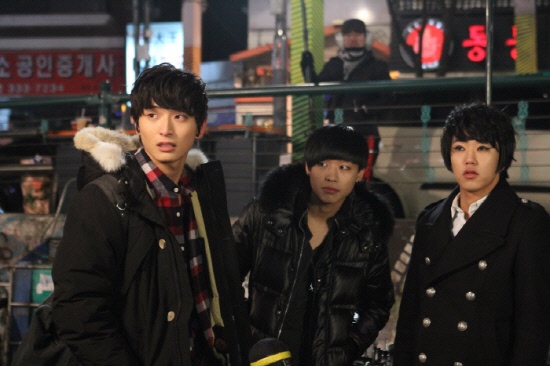 TOXIC, the winner of KBS’s recent audition show, “Top Band,” has made a special cameo appearance in the upcoming KBS drama “Dream High 2.”

According to KBS, the two TOXIC members, Kim Seul Ong and Kim Jung Woo, held a joint performance with 2AM’s Jinwoon at a recent recording of “Dream High 2.” TOXIC and Jinwoon gave a successful street performance in the middle of Hongdae, a young and hip college area in Seoul, receiving a standing ovation from the people passing by. The scene will also involve TOXIC’s comic acting at the end, as they get upset over Jinwoon being underage.

“We feel honored to appear in ‘Dream High 2.’ Our teamwork with Jinwoon was really good, too, so we were able to film in a fun environment,” TOXIC said in a statement.

You can find out the rest of the performance when the first episode of “Dream High 2” airs on January 30. Meanwhile, enjoy a video of TOXIC’s live performance on “Top Band” below!

Jeong Jinwoon
2AM
Dream High 2
Top Band
Toxic
How does this article make you feel?