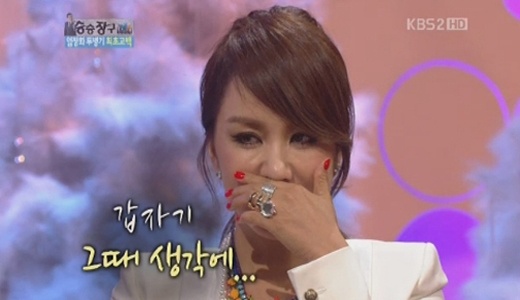 Uhm Jung Hwa shared the story of her cancer diagnosis on television. On January 10, the actress made a guest appearance on KBS 2TV’s talk show “Win Win“.

She stated, “Every year I get a full check-up session and that is when I was discovered I was diagnosed with thyroid cancer. I was told that after undergoing surgery, it would be fine, and that I just had to rest at home for a month after the surgery. I’m healthy now.”

Uhm Jung Hwa’s fans have also been shocked when they heard the news as the top star was appearing as a judge on Mnet’s talent show “Superstar K” at the time. She explained, “When I found out about the diagnosis , I was so shocked as ‘thyroid cancer’ were such scary words to me.” She continued by saying, “I hated to be in that situation and I was scared of people knowing,” explaining why she didn’t want to share it with the world.

She further revealed, “To be honest, my voice isn’t as it once was. To tell the truth, I was very concerned over the condition of my voice.”

Uhm Jung Hwa couldn’t hold her tears back as she talked about one of the most painful moments of her life. “Doctors said they couldn’t be 100% sure that I would sing as I used to after the surgery. I hesitated and tried to find other ways to be cured without undergoing the surgery. During the days following the surgery, my voice wouldn’t come out and these were very difficult times for me. At the time I was filming for Superstar K, sometimes my voice wouldn’t come out.”