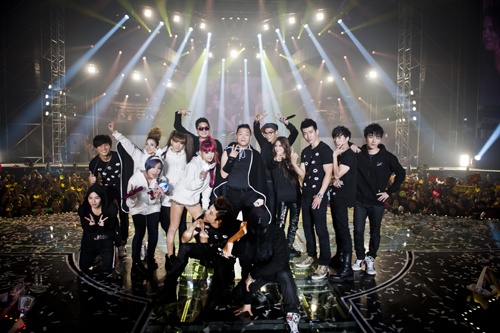 The YG Family Concert tour in both Korea and Japan have successfully came to an end.

This tour was in commemoration of YG’s 15th anniversary and featured the top YG artists such as Jinusean, Big Bang, 2NE1, Se7en, Gummy, Psy, Tablo and more. The YG family toured around Korea and Japan, reaching crowds of 20,000 people and more. Each group/artist showed strong and charismatic performances. Since it was the first joint concert in five years, fans showed a lot of love as well.

As expected, all of the artists performed their hit songs. But there were a few special performances that left a greater impression such as Taeyang, Daesung, Seungri and Se7en’s rendition of 2NE1’s “It Hurts” and “Lonely,” Gummy’s jazz remake of G-Dragon’s “Heartbreaker,” and Jinusean, Se7en and G-Dragon’s “Fly Gentlemen.“

The HD LED screen at the Osaka Kyosera Dome and the Saitama Super Arena, which holds over 40,000 people, held those in the farthest seats to catch every glance of their favorite artists up-close. There were moving stages, cranes, magic lifts and other special stage props as well as flashy video clips to further entertain the audience.

One particular attendee exclaimed, “The YG Family members give off an artist/musician feel rather than an idol feel due to their strong and charismatic presence. I think their performances can be compared worldwide. I hope the YG artists will be more active in Japan in the future. I even wish that they would put Japan activities as their priority.”

This concert tour held many special meanings, which further impacted the audience. Last year, Big Bang temporarily stopped their activities due to certain happenings and events but through this opportunity, the five members were able to reunite and perform as a team.

Daesung gave his insight by saying, “Through this experience, I realized once again how precious and valuable music and the stage are. I hope I can meet all of you again through a Big Bang concert next time.” This showed how the members of Big Bang came together, stronger than ever as they prepare for a new start in February.

Psy also showed how K-Pop doesn’t only have to be about idol stars. With his crazy and energetic performances and his comments in Japanese in between performances, Psy almost had no time to sit down and rest through the entire concert as he showed excellent stage manners.

Gummy sang a song called “Departures” by popular Japanese group, globe. This became such a hot topic that globe member and famous producer, Tetuya Komuro made a surprise appearance and held a joint performance with Gummy. Though it was their first time meeting on the day of the concert, they showed perfect chemistry and surprised the Japanese audience.

The artists of YG Family will return on January 23 and begin their separate activities henceforth.