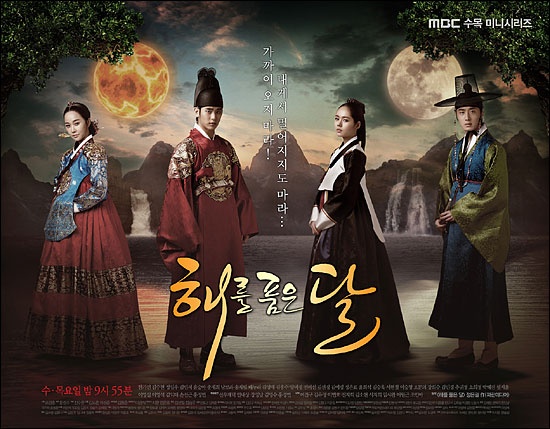 MBC’s Foreign Business Administration Headquarters discussed sending “The Moon That Embraces the Sun” to foreign countries after the first episode’s airing. Previous MBC historical dramas such as “Queen Seon Duk,” “Jumong,” and “Jjak Pae” have all been successes. The viewer rate after the first episode, which was an impressive 18% according to AGB Nielsen Media Research, has added fuel to the discussion.

“The Moon that Embraces the Sun” is expected to have a profit of over $100,000 USD (per country). It’s even been predicted to surpass those of “Queen Seon Duk” and “Jumong.”

And just five episodes later, the viewer rate rose tremendously to 30%! This may not seem like a lot, but keep in mind that MBC’s most famous historical drama, “Jewel in the Palace,” averaged a 47% viewer rating. (Do you remember the craze over that one?)

A TMTETS (“The Moon that Embraces the Sun”) drama representative said to Sports Korea via telephone conversation on January 25, “TMTETS is well made and has a high viewer rate that is more than sufficient enough to place it on the foreign market. It’s expected to do even better than its predecessors.”

Similar to MBC’s “Jewel in the Palace,” “Queen Seon Duk,” “Damo,” and the like, “The Moon that Embraces the Sun” is good as it was promised to be. It features a cast of actors who are new to the Hallyu world, but talented nonetheless. Kim Soo Hyun, who plays the role of King Lee Hwon, was already well known for his acting in KBS‘s popular “Dream High.” He travelled to Singapore and Japan for promotions, making fans along the way. Jung Il Woo (plays the role of Prince Yang Myung, King Lee Hwon’s half brother) has a few works on his acting resume, starting with the MBC sitcom “Unstoppable Highkick,” KBS’s “My Fair Lady,” and tvN‘s “Flower Boy Ramen Shop.” And don’t forget actress Han Ga In (Yeon Woo), who acted in MBC’s “Dr. Kkang,” SBS‘s “Witch Yoo Hee,” and “Bad Guy.”

“The Moon that Embraces the Sun” is also garnering attention for the big bucks that it rakes in. It’s an estimated $20 million USD so far, and is predicted to go over that number as the episodes progress. And just think about how much it would make if it went overseas! Countries like Japan, Singapore, Taiwan, and Vietnam would bring an added sum of $8 million dollars to that total. (This is an estimate calculated by 4 countries times 20 episodes times $100,000 USD per country.) Add in DVD’s, OST soundtracks, and other various profit, and we’ve got us some serious cash.

An MBC representative said, “‘The Moon that Embraces the Sun’ is built on a strong script, as well as a talented cast. There is no doubt that it will surpass your expectations.”

TMTETS airs episodes every Wednesday and Thursday, so don’t miss out on this next highly anticipated drama!