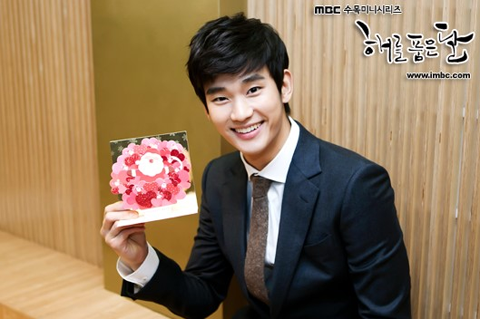 The photo of Kim Soo Hyun and Shin Se Kyung together caught netizens’ eye. The two are classmates, both in the same year and majoring in Theater and Film Studies at Joongang University. In the photo, Kim Soo Hyun has his arms around a classmate and Shin Se Kyung, who covered half of her face, looking slightly embarrassed.

Unlike the regal, clean-cut image he has developed with his role as King Lee Hwon, Kim Soo Hyun showed off a completely different look with a bushy hairstyle. Netizens commented, “I didn’t know the two were classmates,” “Kim Soo Hyun’s bold hairstyle really caught my eye,” “Both Kim Soo Hyun and Shin Se Kyung haven’t changed a bit,” and more.

Recently, photos from the set surfaced various blogs, giving fans a sneak peek into the next episode, while “The Moon that Embraces the Sun’s” Director of Photography, Song In Hyunk, tweeted a message that had all “Moon/Sun” fans sitting on the edge of their seats. Additionally, representatives from the drama revealed that Kim Soo Hyun’s Ikseongwan [hat] had to be custom-made for him because of his small face. Child actress Kim Yoo Jung also revealed that Kim Soo Hyun was her ideal type.

Han Ga In
Jung Il Woo
Kim Soo Hyun
Shin Se Kyung
The Moon That Embraces the Sun
How does this article make you feel?