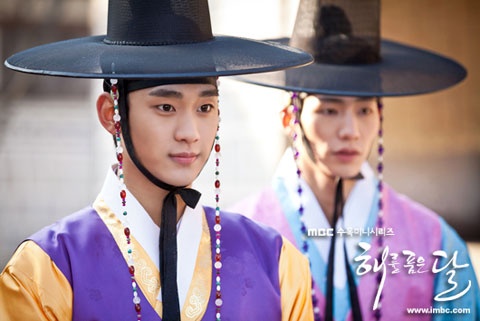 Earlier today, “The Moon that Embraces the Sun’s” official twitter account published a photo of Kim Soo Hyun and Song Jae Rim fooling around, much to fans’ delight. In the photo, Kim Soo Hyun, who plays King Lee Hwon, and Song Jae Rim, who plays the King’s loyal bodyguard Woon, mimicked the “couple in the rain” scene done by child actors Kim Yoo Jung and Lee Min Ho in an earlier episode. In the scene, young Prince Yang Myung shielded young Yeon Woo from the rain with his robes. Along with the photo, reps from the drama tweeted, “Hyung Sun [Hwon’s eunuch] is going to be jealous. Royal highness~ Hwon-Woon couple parodies young Yang Myung-Yeon Woo scene. Tomorrow if finally Moon/Sun day! Please tune into episode 11!” Fans commented, “How funny!” “Hwon and Woon should have a love line,” “I can’t wait for tomorrow,” and more.

Recently, photos from the set surfaced various blogs, giving fans a sneak peek into the next episode, while “The Moon that Embraces the Sun’s” Director of Photography, Song In Hyunk, tweeted a message that had all “Moon/Sun” fans sitting on the edge of their seats. Additionally, representatives from the drama revealed that Kim Soo Hyun’s Ikseongwan [hat] had to be custom-made for him because of his small face. He also surprised his fellow cast and crew by treating them to 150 servings of hot pizza. Child actress Kim Yoo Jung also revealed that Kim Soo Hyun was her ideal type.

More BTS shots from the drama