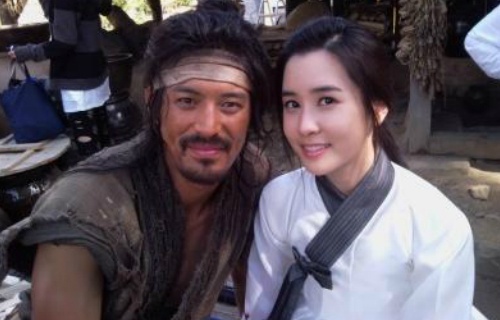 “Chuno” couple Oh Ji Ho and Lee Da Hae are back together again. This time, the good-looking actors are running—not from slave-hunters like they were in the drama, but for SBS’ Sunday variety “Running Man.”

On February 7, a photo of the two with the cast of “Running Man” circulated through online community boards and social networking sites. The photo was reportedly taken by sharp-eyed fans in Busan, where one of the show’s missions were completed.

According to reports, Lee Da Hae and Oh Ji Ho teamed with HaHa. Kim Jong Kook, Lee Kwang Soo and Ji Suk Jin formed another team, while Yoo Jae Suk and the “Monday Couple” Gary and Song Ji Hyo made up the other.

Netizens who have seen the photos commented, “When will this special happen?” “Who is the chaser this time?” “Always, a spoiler for ‘Running Man,’” It’s good to see the ‘Chuno’ couple together after a long time,” and such.