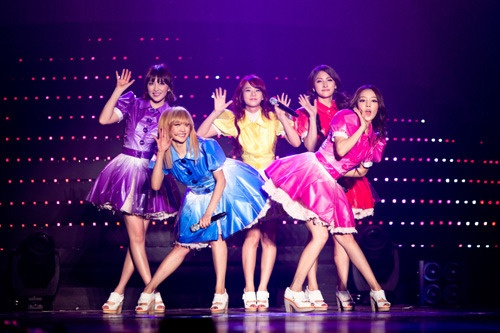 The girls of Kara revealed that their secret to success in Japan was their friendliness. At the press conference for their KARASIA tour Seoul concert on February 18, Kara stated, “We don’t worry too much about our image being misperceived. We work hard and try our best, and I think that is part of what our Japanese fans saw in us.”

Goo Hara made comments about how each member had a distinct charm that helped their way to fame in Japan. The youngest Jiyoung has a cutesy charm, and Nicole has a carefree Hollywood style. Leader Gyuri has the undeniable beauty of a goddess, and Seung Yeon is the model college student. Hara labeled herself as the lovely one making all the other members burst out in laughter.

Seung Yeon stated, “I think it was our innocent smiling faces that made it easy for us to approach the people in Japan. Even now, unlike other girl groups, we’re able to openly and freshly laugh out loud.” Member Jiyoung added, “Our biggest charm is the fact that we eat a lot. Maybe people like us because we eat wholeheartedly and pleasantly,” again creating cheerful laughter in the room.

Starting in Seoul, Kara embarks on their Asia tour, traveling to Japan, China and other countries in April. The concert is Seoul will be their first concert since their debut five years ago, and they will start off in front of two thousand fans in the span of two days.