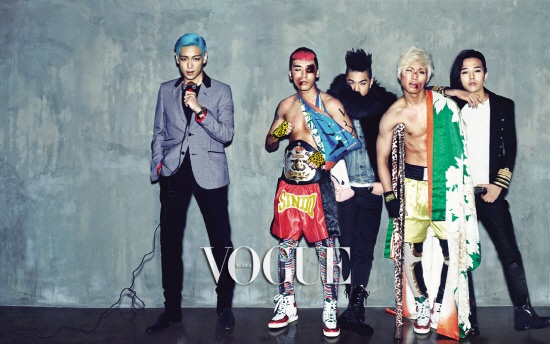 The photos from Big Bang’s photoshoot with fashion magazine “Vogue Korea” were revealed. We reported last week about this photo shoot and you can see more photos here. The interesting part about this photoshoot is the concept, which was “boxers.” The photoshoot received its inspiration from the film “Rocky.” It was a mixture of Big Bang’s unique styles and boxing champions.

Each member of Big Bang also had their own concept. Daesung was the “Champion,” Seungri the “contender,” T.O.P. was a ‘Round Boy,” G-Dragon and Taeyang were both stylish trainees.

Daesung and Seungri used this opportunity to show off their rock hard bodies and abs. The tattoos on Seungri took 3 hours to draw.

This boxing concept “Fashion King” photoshoot will be on the March issue of “Vogue Korea” and will span 16 pages. Big Bang’s new album “Alive” will be released on February 29.