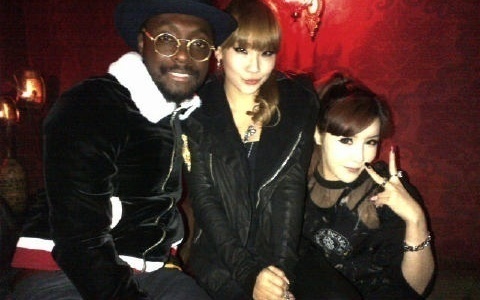 2NE1 Plays New Song by Will.I.Am at a Club in Seoul?

In a fan-made video posted on YouTube earlier today, 2NE1 was seen playing a new track written by Black Eyed Peas’ Will.I.Am, who was in Seoul as part of Intel’s promotional tour. In the 1:45-long video, 2NE1’s CL, Park Bom, and Dara (Minzy was not able to join the crew due to age limit) is seen partying it up to the tunes of what is rumored to be their new track by Will.I.Am.

According to the person who posted the video, 2NE1 played the song at Club Answer, one of the hottest clubs in downtown Seoul. The girls were at the club with Will.I.Am for a special “Will.I.Am in Seoul” event, during which the U.S. producer at one point started jamming this song.

The song was all in English, and although it was just a brief play of the song, the video-producer was able to catch some of the lyrics that read, “You know I need you, need you, I need you everyday…I will run to you baby…We’ll take the world on, on, on!”

It’s hard to hear the song due to the poor video conditions, but it sure sounds like another smash hit in the making!

2NE1
CL
Dara
Park Bom
will.i.am
How does this article make you feel?