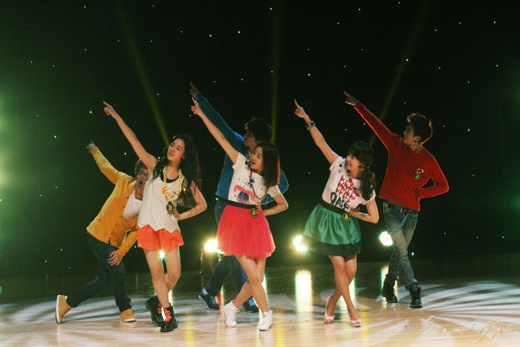 On March 2, KBS “Dream High 2” revealed a surprise music video of their latest OST track, “B Class Life.” The track was first revealed during the February 27 episode of “Dream High 2,” when Kang So Ra, Jinwoon, and their friends performed at the first “Super Idol Mission.” But following its unexpected rise in popularity, KBS decided to release the song and the MV online.

The song’s producer Park Jin Young also seemed quite shocked by the song’s sudden popularity. The day after the song was aired, JYP tweeted, “I had no idea you guys would like ‘B Class Life’ this much. It wasn’t even in our plans to release it online, but I heard it will be tomorrow. The OST songs I really worked hard on and expected to make it big have all been quite, while a song that was made in less than 30 minutes to just use during the drama is now a big hit…I think I lost my touch…hmm.”

“B Class Life,” written and produced by Park Jin Young, contains lyrics about aspiring singers with less talent, who often get overlooked by others. Before the performance, Kang So Ra gives a brief explanation about the song, where she says, “We are B-class life, who want to become A-class. We are Bi-Jung Sangs (abnormal people in Korean), who want to get to the jung sang (the top in Korean).” Its lyrics about underdogs have given strength and hope to a lot of viewers, which is apparent in its music chart rankings.

Enjoy the MV below!