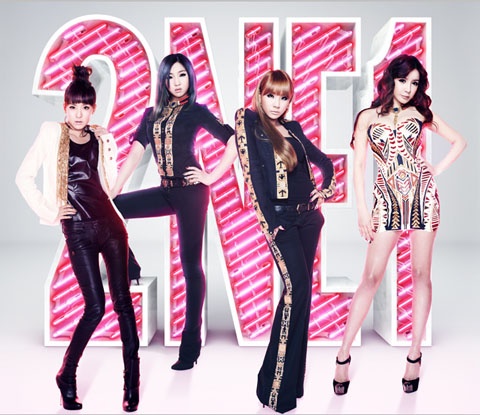 They make their way through a mansion, dancing on tables and posing. Scene changes are through doors opening to new and more fantastic rooms. The video has a great beat, and the “Scream. Ah. Aha-a” bit is going to stick with you. The new single is set for a March 28 release in three different versions. Two CD/DVD versions and the CD only version. The “SCREAM” single also includes “Fire.”

Not only is 2NE1 releasing this new single, they are also releasing an album! The title is “Collection” and will include the new single “SCREAM.” “Collection” will also have three versions. The first will have the CD, two DVDs and a photobook. The second will have a CD and DVD. The third will be the CD only version. “Collection” will hit stores at the same time as “SCREAM,” on March 28. There’s also a special limited release version of “Collection” that includes a bag and a NOLZA face towel.

Finally, for those who just aren’t satisfied with all of these 2NE1 goodies, “2NE1 TV Season 1” and “2NE1 TV Season 2” DVD set will also hit Japanese shelves on March 28. 2NE1 covered Madonna‘s “Like a Virgin” and that cover will be used in a Lipton tea commercial featuring Kitagawa Keiko. Another song “Love is Ouch” will be used in a commercial for the magazine “CanCam.” While “I Don’t Care” will be the ending song for the Asahi show “Be-Bop! High Heel.” Check out a the Lipton commercial below.

2NE1
Kitagawa Keiko
How does this article make you feel?