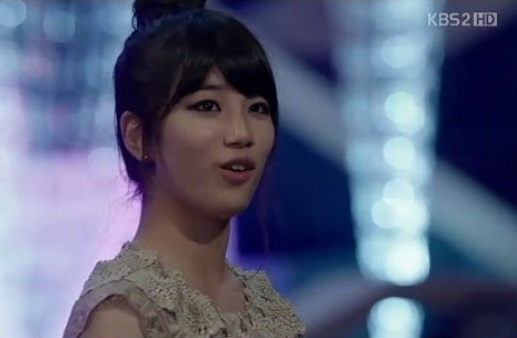 On March 19, miss A’s Suzy made a surprise cameo appearance on KBS “Dream High 2,” making a return to the popular drama series for the first time since last year’s first season when she played a leading role.

In the episode, the rookie group, Super Idols, had their debut performance. It was the first TV appearance for the idol stars that were picked from the Super Idol audition, including Jinwoon, Junior, Ailee, Park Seo Joon, Kim Ji Soo, and Jiyeon.

But on their way up to the stage, the group were faced with miss A, who had just finished their performance. Suzy recognized Jiyeon and said, “Hey Rian, you’re in the same group as these guys?” and walked away in apparent embarrassment.

Suzy played the main female role, Ko Hye Mi, in last year’s first season of “Dream High.” Her friendship with the production crew and personal attachment to the “Dream High” series brought her back to the show, albeit in a cameo role. She became the third “Dream High” cast member to cameo in “Dream High 2,” after Kim Soo Hyun and IU.

Suzy
Jeong Jinwoon
2AM
Dream High 2
Jiyeon
miss A
T-ara
How does this article make you feel?