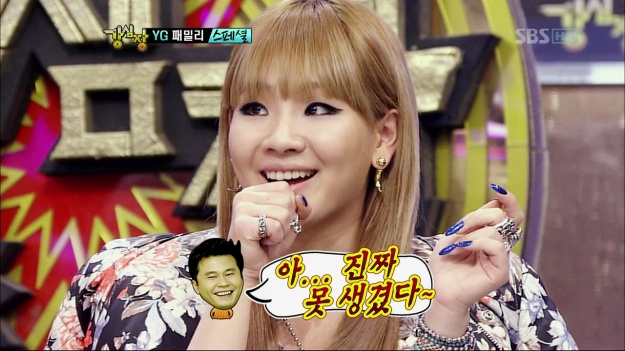 For the “YG Family Special” of “Strong Heart” on March 28, Lee Seung Gi asked, “Does YG Entertainment look at looks when picking its members?”

Lee Seung Gi then called out Daesung’s name and Daesung replied, “Don’t look at me. Look at your front [Psy].” Psy answered, “Yes” and Lee Seung Gi joked that they had found out Psy is a liar.” (Lee Seung Gi was teasing that Psy did not get into YG Entertainment because of his looks)

Lee Seung Gi asked Daesung again, how big of a portion looks count for YG Entertainment members. Daesung said, “YG does take into account looks, but only about 3.5 out of 10.”

Then the show moved on to its CEO YG. After talking about YG’s management style the next question asked was, “Did you ever have any complaints about YG?” The topic quickly changed back to looks.

CL said, “We (2NE1) are a girl group. He keeps saying that we are ugly.” Lee Seung Gi was surprised and asked, “He tells you directly that you are ugly?” CL said “Yes.”

CL continued, “YG came to a concert rehearsal once. When we do a rehearsal we don’t put on any makeup. He looked from afar into the screen and said ‘Ah… They are really ugly.’ In front of all the staff! I was a bit disappointed.”