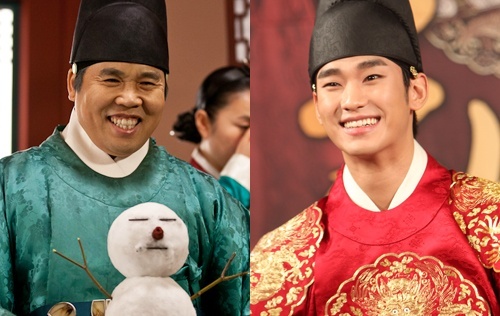 Not only are the lead actors for the immensely popular drama, “Moon That Embraces The Sun,” are basking in the limelight well after the drama ended. It is evident that even the supporting characters are enjoying the aftermath attention as they, too, receive many different CF offers.

Jung Eun Pyo garnered sizzling interest through his role as the Attendant Hyun Sung to King Hwon (played by Kim Soo Hyun) and he is in the spotlight again for being recently reunited with ‘his’ king, Kim Soo Hyun, to film a commercial.

On the 28th, Kim Soo Hyun was taking part of an outdoor shoot for Beanpole (for which he is currently the main model) in Jaeju Island, but this photo shoot also featured another model, Jung Eun Pyo. As part of the shoot, both actors donned similar trench coats as if they were dressed as a couple. The two actors recently became close from acting together in “The Moon That Embraces The Sun” and their characters comedic scenes quickly made them one of the most favorite pairs from the drama amongst the viewers. Their great chemistry seemed to translate onto the shooting set, as the pairs’ smile never once left their faces.

Other supporting cast members for “The Moon That Embraces The Sun” has caught the attention of various commercial casting directors as well. Jang Nok Young, who played the younger version of Jan Shil, discarded her shaman image and she too features in a variety of advertisements showing off both her childlike and young woman’s image.

Hyun Sun
Jung Eun Pyo
Kim Soo Hyun
The Moon That Embraces the Sun
How does this article make you feel?