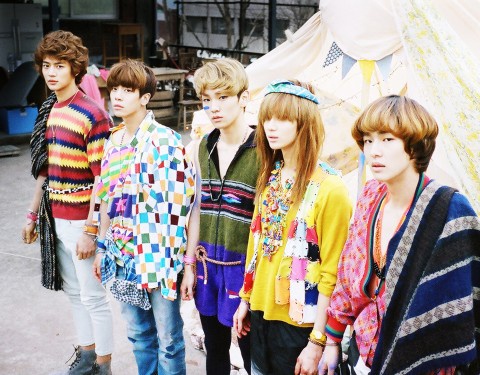 Who Does SHINee Want to Kiss?

SHINee will guest on tonight’s episode of Mnet’s “The Beatle’s Code 2” and reveal whom each member wants to kiss. Recently, SHINee and 2NE1’s Sandara shot a series of CF stories, titled “Kiss Note,” for cosmetic brand Etude House to endorse the latest line of lipsticks. Similar to the movie “Death Note,” Sandara would write the names of SHINee members in a “Kiss Note” book, using a lipstick from Etude House, and receive kisses from them.

MC Shindong suggested, “We’ll keep your secret, so why don’t you write the name of the person you would like to kiss?” SHINee agreed, and the boys shyly covered their papers with their left hands as they wrote down the names. Comedian Lee Yong Jin commented, “I can boldly reveal who I want to kiss,” and named actress Han Ye Seul. Key humorously stated, “That’s easy to do if you have nothing to lose,” to which Lee Yong Jin replied, “That’s harsh, young man.”

During the show, the guests will talk about the “Idol 91 Line,” organized by none-other-than SHINee’s Key. The group is a “club” of idol stars born in 1991 and includes KARA’s Nicole, miss A’s Min, 2AM’s Jinwoon, After School’s Nana, and more.

Make sure you check out the full story behind “Kiss Note” and “Idol 91 Line” on tonight’s episode of “The Beatle’s Code 2” at 9PM KST on Mnet.

SHINee
2NE1
Key
How does this article make you feel?