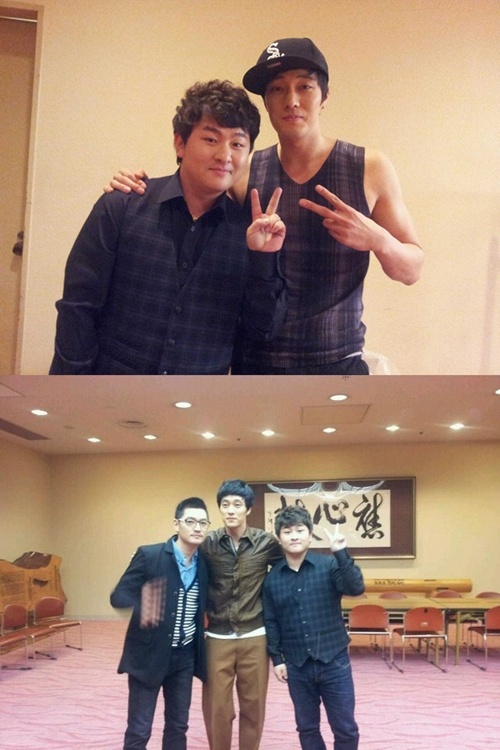 Singer Huh Gak posted a picture of himself with actor So Ji Sub on twitter and commented, “Thanks for the good time in Japan, my bro So Gan Ji!!!!!!!” In the revealed picture, Huh Gak and So Ji Sub are standing side by side and posing in front of the camera. There is also another picture of the two with singer Bobby Kim.

It turns out that these pictures are from So Ji Sub’s fan meeting in Tokyo, Japan on March 25. Huh Gak made a guest appearance at the event, as he featured in So Ji Sub’s new album “Corona Borealis.” Approximately 10,000 Japanese fans gathered for this fan meeting and So Ji Sub greeted these excited fans with the songs from his newly released mini album. Huh Gak and So Ji Sub together performed the title song “Such A Story” from “Corona Borealis.”

While busy helping out a friend in need, Huh Gak released his second mini album “Lacrimoso” on April 3. The title song “The Person That Loved You” instantly topped several online music charts upon its release.

Please check out the music video of “Such A Story” by So Ji Sub with Huh Gak below!

Bobby Kim
Huh Gak
So Ji Sub
How does this article make you feel?