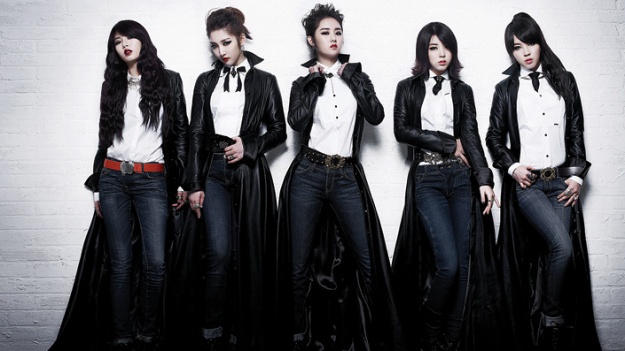 Korea’s hot issue, 4Minute has returned once more with their third mini-album. The title track is “Volume Up,” a Sinsadong Tiger-Rado production. It has an addictive saxophone melody and honest lyrics. Other songs include hip-hop intro, “Get On the Floor” as well as a hip-hop number with Latin elements, “Say My Name.” The group has also collaborated with Shinhwa’s M and indie band, THE KOXX in “Femme Fatale” and “Dream Racer” respectively.

Huh Gak, who has tore up the hearts of listeners with his emotional music, has returned with a new mini-album, “Lacrimoso.” Fans are expected to tear up once more whether it’s a bright or gloomy song. The title track is “To the Person Who Loved Me,” a tear-jerker composed by Choi Gyu Sung. It has beautiful sting and piano arrangements. The artist does a great job hitting all the high notes with much ease.

Seo In Gook has returned with a new style, exciting fans once more. The title track is “Push and Pull,” composed by Drew Ryan Scott. This time around, Seo comes before fans as a chic and slick man. The song has unique lyrics about asking a woman not to go too fast but not too slow either. The song is expected to be very fun and an upgrade to “Shake It Up.” Other memorable tracks include “Time Machine” and “Brand New Day.”

SM’s rookie group, EXO-K and EXO-M will finally release their first mini-albun, “Mama” this week. The two groups hope to show futuristic music and performances worldwide. There are both Korean and Mandarin versions of this album, featuring different members. The title track is “Mama,” and the groups hope to showcases their dynamic vocals and sounds through this song. There are a total of six songs in the album.

Yangpa has released a new single, “Together” in midst of an upcoming album. The song is “Love Is Like This,” a sad number featuring Davichi’s Lee Haeri and rookie singer, Hanna. The song was composed by Jo Young Soo and penned by Kang Eun Kyung. The sad lyrics are expressed well by the three singers.

Gummy and Bobby Kim, both who have received much love through MBC’s TV show, “I’m a Singer”, has returned once more for another duet. Titled, “Love Recipe II – People These Days,” it is a medium-tempo number with acoustic arrangements. It was composed by PK&Dee.P and penned by Tablo.